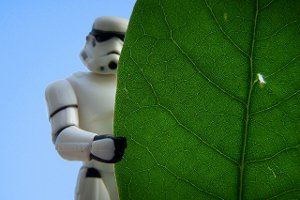 In honor of the 35th Anniversary of Star Wars, a Star Wars themed poll.

Do what you like with it! Scent a character from the movies, tell us something about Star Wars (your favorite of the movies? why you've never seen any of them? why you've seen all of them 4 times?), or just tell us what fragrance you're wearing today.

Note: image is Leaf No Man Behind [cropped] by JD Hancock at flickr; some rights reserved.

p.s. for the true nerds among us, check out An Analysis of Blaster Fire in Star Wars over at Wired.