About Aftelier Sepia, Mandy Aftel wrote, “In creating this perfume, one of the things that I especially like (yet also find especially difficult) is trying to translate an emotionally visual experience into an equally emotional perfume experience.”

This statement might lead you to think Sepia is an abstract fragrance without a figurative anchor, but that’s not true. But it’s also not true that Sepia is a Demeter-like recreation of an existing odor — in this case, the scent of the California ghost towns that inspired Sepia. Instead, Sepia is an unusual blend of mood and reality, a fragrance that evokes a definite physical presence as well as the aura surrounding it.

Sepia’s top notes are blood cedarwood, pink grapefruit and yellow mandarin; its heart is pink lotus, jasmine, strawberry, cocoa and coffee; and its base is indole, ambergris, tobacco, labdanum, cepes and oud. Aftel documented Sepia’s creation in a series of letters to Laurie Erickson of Sonoma Scent Studio on Nathan Branch’s blog. The letters start here.

Sepia is a freaky little perfume. Its soft fruit, wood and tiger’s eye-glint of ambergris draw me near, but an animalic, fusty aspect keeps me from getting too comfortable. If I accidentally put my hand in a puddle of Sepia and didn’t know what it was, I might rush for a bar of soap, not sure what compost bin casualty had left the puddle behind. But I know I’d drop the soap instantly and spend the next few hours walking around with my hand plastered to my nose, trying to get to the bottom of this mysteriously beautiful fragrance.

Sepia Eau de Parfum goes on with warm, round citrus that flashes from fresh to sweetened then is quickly subsumed by musty wood. This wood isn’t a simple two-by-four, but is a pile of old cigar boxes, Depression-era siding left in the rain, and pencils. An earthy, slightly rotted aroma, like the dark corner of the garden that you suspect makes up a stretch of the neighborhood’s raccoon expressway, adds intriguing depth

Don’t think that the fragrance is dense and oily, though. Sepia has the feel of a thick down comforter — full of both presence and loft. I’m also afraid I’ve made Sepia out as a simple mix of fruit, wood, and rot, and that’s not true at all. It’s a moody, complex fragrance.

In the end, to me Sepia does smell like a ghost town washed with rain and whose buildings are still home to decrepit horsehair sofas and dusty windowsills. But along with this physical evocation of a desolate town, long abandoned, I smell some of the life I imagine used to be there, too — the horses, the letters, the darkened sheds. Ennio Moriconne and Jack White could write the soundtrack.

I've sampled Sepia Eau de Parfum off and on for about ten days now, and although I was intrigued right away, I've liked it the more I've worn it. If you do sample Sepia, be sure to give it at least three wearings before passing judgment. 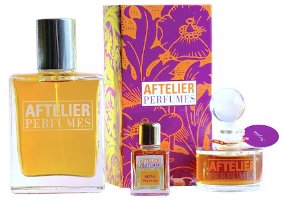 Aftelier Sepia is impossible to assign a gender to. It lasts about three hours on my skin and has moderate sillage. Sepia is available in 30 ml Eau de Parfum spray ($150), or in 2 ml ($45) or 1/4 oz ($150) Parfum. Samples are also available. For information on where to buy Sepia, see Aftelier under Perfume Houses.