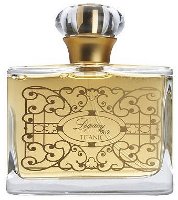 RMS Titanic, the "official salvor-in-possession of the Titanic", has launched Legacy 1912 Titanic, a new perfume for women:

Legacy 1912 is based upon the perfume oils developed by German-born chemist Adolphe Saalfeld. He was traveling on the Titanic to New York in hopes of developing a new line of scents. He survived the sinking, but his samples were lost. Found 2-1/2 miles beneath the ocean's surface, many samples amazingly still contained their oils.

...Legacy 1912 eau de parfum surrounds you with the fragrance of delicate lemon and nerolis, alongside blushing rose and warm, sheer amber.