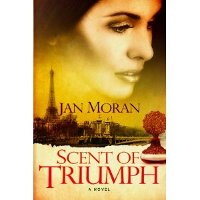 Jan Moran, author of the Fabulous Fragrances books and creator of the Scentsa fragrance finder, will publish her first novel, Scent of Triumph, in May:

Scent of Triumph is the story of Danielle Bretancourt, a talented young French perfumer with a flair for fashion. The story opens on the day England declares war on Germany, and Danielle and her family are caught in the midst of a raging disaster sweeping across Europe.

Tragedy strikes when Nazis murder her husband and her son is stranded behind enemy lines. Determined to find him, she spies for the French resistance, but is forced to flee Europe with fragments of her family.

Destitute, she mines her talents to create a magnificent perfume that captures the hearts of Hollywood's top stars, then gambles again to win wealth and success as a couturier. Her intelligence and style attracts the adoration of Jonathan Newell-Grey, head of England's top shipping conglomerate, and Cameron Murphy, Hollywood's most charismatic star.

Danielle charts her course through devastating wartime losses and revenge, lustful lovers and loveless marriages, and valiant struggles to reunite her family. Set between privileged lifestyles and gritty realities, here is one woman's story of courage, spirit, and resilience.

You can pre-order at Amazon now.