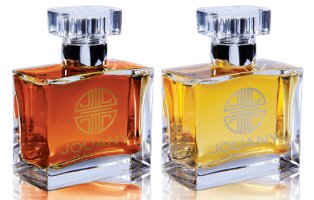 There are perfumes simply branded with celebrity names, and then there are perfumes celebrities have a firm role in creating. I don’t know if you’d call photographer Christophe Jouany a celebrity exactly, but his fragrances, Jouany Perfumes St Barthélemy and Marrakech, come straight from his own, personal mixes of essential oils.

“I created my own formulas,” he replied when I asked via his public relations company which perfumers he had worked with for St. Barthélemy and Marrakech. Enough people complimented Jouany on his oil blends over the past decade that he decided to produce two of them for the public. He said noses Jean Pierre Subrenat and Udo Ludwig tested the fragrances to “make sure they were well balanced” and see if they needed anything extra. Now, Udo Ludwig is in charge of producing the compounds for the fragrances through the firm Creative Fragrances.

St. Barthélemy has notes of white grapefruit, vanilla, coco Jasmin, cedarwood, patchouli, sandalwood, vetiver, and white musk. Jouany said its compound is comprised of 68% essential oils, with the rest being mostly synthetic musk. To me, St. Barthélemy smells like a cushion of white musk, with dry cocoa, a splash of green, and a hint of wood. A little grapefruit does rumble in the beginning, but it’s not insistent and avoids the dreaded cat pee effect some grapefruit notes produce. A whisper of menthol keeps the cocoa and vanilla from turning snack cake. Does the fragrance smell anything like St. Barthélemy feels? I wish I could tell you. (When a perfumer makes something called Tacoma or Fresno, let me know.)

Marrakech has notes of orange blossom, bergamot, grapefruit, jasmine, neroli, patchouli, and white musk. According to Jouany, 75% of Marrakech’s compound is essential oils. Marrakech is all about orange blossom and musk. The orange blossom reads less like a bridal show and more like damp, petal-laden craft paper — but I like that. Neroli adds juiciness to the orange blossom. The patchouli and jasmine don’t stand out to me distinctly, and the fragrance is less overtly floral than you might imagine from its notes. Marrakech does a good job avoiding the all-too-common "gas station soap accord" that can arise from a musk-orange blossom combination.

To me, both men and women, even those cleaving to traditional gender expectations, could wear either scent comfortably. Both fragrances stay fairly close — although not tight — to the body, and they last about half a day. One friend I asked for an opinion said I smelled “clean and soft.” Even though I had two spritzes of each fragrance on (one fragrance on each arm), she couldn’t smell it from across a café table. When I got up, she said a nicely scented whiff blew by. I think they’d be safe office fragrances, especially Marrakech.

If the Jouany Perfumes line has a signature, it’s white musk. I think that’s what attracts me to these fragrances. Although clean musk fragrances are a dime a dozen these days, white musk hasn’t been in fashion since Jovan’s heyday in the late 1970s. Maybe it’s time for a resurgence. Neither of these fragrances is wildly original, but I can’t think of anything like them on the shelf at Macy’s. They feel warm, soft, and personal. They’re perfect bedtime perfumes. I’ll be sad when my time with them is over.

Jouany Perfumes St. Barthélemy and Marrakech can be found at Beautyhabit, Henri Bendel, and at the Jouany Perfumes website, $125 each for 50 ml Eau de Parfum.