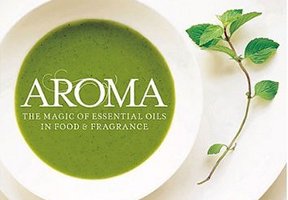 When I explain who Mandy Aftel is to people outside the perfume world I often call her the Alice Waters of natural perfume. Both women are pioneers — influential innovators in their respective fields. Just as Waters combined her passion for local, organically grown food with fine cuisine, Aftel combined her love of botanical essences with a sophisticated understanding of perfumery. And they're neighbors: Aftel lives and works a block from Waters’ famous restaurant Chez Panisse in Berkeley, California.

But it wasn’t until my recent conversation with Aftel about her food work that I realized just how deeply involved she was in the culinary world. She has lectured vintners at Coppola Winery and sommeliers at Thomas Keller’s renowned restaurant, The French Laundry. She has taught alongside White House pastry chef Billy Yosses, and worked with a long list of celebrity chefs including Dan Barber, Wylie Dufresne and David Chang. Food scientist Harold McGee has become a friend. McGee’s newest book is on flavor, and he stopped by Aftel’s studio not long ago to sniff a few things and talk about the importance of aroma in food.

“It’s a deep question,” she said, when I asked her about the connections between her perfumery and her food work. “I do go back and forth from food to perfume and perfume to food, but I see them as very, very similar in my mind and I always did.”

“I was eating and cooking before I was a perfumer,” she continued. “I think the interest for me in both is in the integrity of ingredients, the perfection of an ingredient, whether it’s an oil, or a tomato…  The excitement, on the perfume side, of what one ingredient, one essence, can do with another is kind of the bedrock of how I create perfume. It’s one of the biggest things to me — this perfect drop of something and what it can do with another perfect drop of something. I’m really in love with that aspect of making perfume, and I think that’s gone on in food for me as well.”

It was Aftel’s tour for her book on scent and natural perfumery, Essence and Alchemy, that got her thinking about working with chefs. “I was very aware that people had no knowledge of the differences between naturals and synthetics in those days. They didn’t think about the quality of ingredients…I thought, "Where are people interested in ingredients? Of course: food."

A friend — who also happened to be Alice Waters’ press agent — put her in touch with the innovative young chef Daniel Patterson. Aftel went to see him, carrying her portable perfumer’s organ full of “these little tiny bottles of essences.”

“I showed Daniel black pepper [essential oil] on our very first meeting. It was kind of the ‘aha’ moment for him. I remember seeing it happen. He smelled it and he said, ‘There are possibilities here.’”

Patterson and Aftel began collaborating on the kind of scent dinners that set the pattern for Aftel’s work with other chefs. For an early dinner with Patterson, Aftel created a mint hydrosol that she sprayed on the plate beneath a bowl full of tomato salad. The scent gave diners the illusion that mint was in the dish. Later, she created perfumed fans and solid perfumes that echoed and intensified the components of the dishes served, and passed around bowls of frankincense so the guests could “wash” their hands in its scent. Aftel and Patterson eventually wrote a cookbook together, Aroma: The Magic of Essential Oils in Food and Fragrance, in which Pattterson wrote about the “entirely different flavor and aroma — at once spicy, earthy and floral” of the black pepper essential oil made from ground pepper.

Aftel and Patterson began working together in 2001. Aroma was published in 2004. But the use of scent in food seems to be popping up a lot lately. A recent New Yorker article described elBulli pastry chef Jordi Roca looking for inspiration on the shelves at Sephora. Earlier this week, NPR's Fresh Air re-ran a March interview with chef Grant Achatz in which he describes his use of scented smoke to create the illusion of flavor — a trick he developed after a similar experience at The French Laundry.

I found myself wondering if Aftel and Patterson were not merely ahead of the current trend, but helped to create it — especially after I opened the brand new, much-praised ice cream cookbook from Jeni Bauer to find Aftel’s food oils listed as ingredients in every third recipe.

When I asked her about it, Aftel said only that Patterson, who is a writer as well as a cook, goes to “a lot of very interesting food events,” and that her line of food oils was created in response to the number of calls she got after the publication of Aroma from chefs looking for advice on where to find high quality essences. Her food oil business has increased steadily since then. Williams-Sonoma recently approached her to create a line for home cooks that will launch later this year.

“Once you do this, once you have this experience, it’s very hard to turn back,” Aftel said, pointing to the intensity of the flavors the oils offer, and their endless potential to create new flavors. “I feel like I’m an interesting central bridge between engineering flavor, the way the molecular gastronomy people are doing, and the old school all-natural California cuisine.”

Sophisticated intensity plus all-natural raw materials: it’s easy to see how Aftel’s food work proceeds from the sensibility she brings to her perfumery. But Aftel made it clear that the influence goes both ways. She described driving back across the Bay Bridge from having dinner with Patterson, with the astounding flavor of the fresh ginger and rose soufflé he had made still resonating in the back of the throat — flavors that later made their way into one of her teas.

Some of Jeni Bauer’s combinations — ylang and clove, jasmine and mint — have inspired her, too. “Because my perfumes always start with two components in my head. They start where I’m thinking, ‘How will these two essences dance together?’

But what inspires Aftel the most is a kind of sensibility she finds in the wine and food world. “I’m very excited by the no-holds-barred, luxury, beauty aspect that goes on in food. I think that is the most alive to me of anything I do when I’m trying to make perfume.” More alive, she says, than much of what she finds in the world of commercial perfumery.

She recalled the insight she had teaching a group of pastry chefs. After a day of intensely creative hard work they had produced dozens of beautiful, tiny works of art. Then they ate them. “It was unnecessary. It was luxurious. It was gone in a short period of time... And I thought, 'This is just like perfume. Perfume is just like dessert.'”

Note: top image is detail from the cover of Aroma.