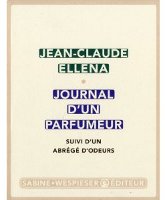 L’odeur est un mot, le parfum est la littérature / Odor is a word, perfume is literature (7). In brief entries dating October 29, 2009 to October 13, 2010, Journal d’un Parfumeur reveals a year in the life (or, rather, the mind) of perfumer Jean-Claude Ellena, and celebrates the connections between language, contemplation and perfumery. Ellena offers a selective self-portrait via bright anecdotes, thoughtful vignettes and philosophical musings, blended with a hearty dose of opinion and a splash of high-brow name-dropping. Places and dates anchor the journal entries, along with brief titles, many of which would would make terrific perfume monikers: Plaisir; Nébuleux; Juxtaposition Toujours la menthe; Classique; Clin de nez; Bill Evans; Bricolage; Moleskine; and Shazam (yes, as in the iPhone app, and yes, related to identifying smells on the streets of Paris).

It turns out that language plays a vital role in Ellena’s creative process as well. Le nom est un son qui doit accrocher tous vos sens, il est le premier contact avec le parfum / The name is a sound that must capture all the senses; it is the first contact with the perfume (40). Describing works in progress — perfume formulae that may never be produced — Ellena explains that names help him to organize and track his creations. Féminin H, Vétiver de Calèche, Cuir de Bel Ami, and Fleur de Porcelaine could have been assigned numerical codes, but only words hold keys to each perfume’s histoire (which fittingly means both history and story in French). My favorite of these draft names, Eau de mandarine bleue, evokes Surrealist writer Paul Eluard’s poem, “The earth is blue like an orange…”

Literary references abound in the Journal. Ellena develops a cluster of comparisons (I’m convinced he knows the term métaphore filée) devoted to the theme of perfumery as writing, smelling as reading. Eau première is a rewriting of the iconic No. 5. Lemon needs a new mise en scène so as not to signify cleaning products. The author associates lexical evolutions with shifts in the meaning of certain smells. The perfumer’s world comprises olfactory statements, olfactory poetry, olfactory declarations, and of course, olfactory compositions. Inspired by the Louvre's multi-disciplinary exhibit Le Vertige de la liste (with guest curator Umberto Eco), Ellena sorts through the peculiarities of the perfumer’s everyday price lists, restricted materials lists, and perfume’s “recipe” lists. Ellena delights in the interaction of words and smells, particularly in linguistic signs unrelated to the scent materials themselves. He owes to this alchemy of wordplay and smell ("olfactory semantics"), his renowned liberation from natural representation in perfumery.

Along with each entry title appear place names, tracking a whirlwind travel itinerary, with stops in Paris, Moscow, Tokyo, Hong Kong, and the studio in Cabris. Faraway journeys spice up the text, but everyday spaces, settings, and objects bring Ellena's world to life. I lingered on a description of the perfumer's desk, its flacons, test strips, paper clips, two pairs of glasses (for reading and distance). Snapshots emerge: Ellena stopping on a busy street to jot ideas in his (but, of course) Moleskine notebook; Ellena cultivating “olfactory encounters” at an outdoor food market; Ellena gauging sillage in the metro to understand perfume trends; Ellena contemplating the blend of cigarette smoke, First (Van Cleef and Arpels), and garlic breath wafting from airline travelers seated beside him; Ellena reading detective novels on a train.

Ellena’s comments on fashion and marketing, as well as his quest, motivations, intentions, art and his craft, contain dozens of pithy, quotable observations which will no doubt turn up on blogs and forum signatures all over the world. “Fashion is, by definition, what goes out of fashion.”  “Green is the only color that makes sense for an odor.” “Gourmand odors are lazy.” Some lines are less quotable, but just as memorable. Drawing on Cézanne's desire to shock Paris with an apple, Ellena explains his ambition to surprise and stun with an everyday odor.

After the journal, Ellena presents an Abrégé d’odeurs, a short list of odor juxtapositions blended to create the illusion of materials that are not present. These illustrate Ellena's signature word and fragrance alchemy, with all the evocative restraint of Haiku. As much experimental writing as experimental perfumery, the Abrégé d'odeurs adds dimension to his earlier claim to being himself a writer of fragrance: “Je me suis toujours senti  écrivain d’odeuers” (12). Ellena claims to have reduced these familiar odors — chocolate, fig, olive, pear, raspberry, etc. — to the level of a linguistic sign. He invites the reader to play along with his semantic experiment: dip the test strips in the materials listed. Smell separately. Then create a little fan, just slightly opened, and sniff.

Journal d’un parfumeur is not a manual of perfumery, nor an autobiography. Ellena does comment on his own creations (particulary the Hermessence line), on canonical perfumes, on market pressures. But parallels to other perfume books do not come to mind. Instead I’m reminded of one of my favorite film books, Jean Cocteau’s Beauty and the Beast: Diary of a Film, where notes on the project (August 1945-April 1946) trigger thoughts on art, life, and the craft.

Ellena's tone — much like his fragrances — remains deceptively light and uncluttered, intellectual but not pedantic. There are moments of joy, wit, even humor. A highlight: Ellena’s 1966 visit with Edmond Roudnitska (scheduled to avoid conflict with the perfume legend's favorite game show, that sluggish chestnut Des Chiffres et des lettres, itself a study in restraint). The young perfumer was sent home because he smelled of musk and laundry detergent.

This portrait of the perfumer is intimate, though not highly personal or confessional in a conventional way. It owes as much (or more) to Ferdinand de Saussure and Claude Lévi-Strauss as to biographical tidbits or the history of French perfumery. We meet Ellena where his mind and senses connect. At a time when intimacy most often equates to emotional venting and the airing of dirty laundry, Ellena’s book reminds us that perception (thought, awareness, sensation) is also deeply personal, and that to share perceptions and ideas is to share one’s life.

Fragrant Readers, you already know the book's one potential drawback: its current availability in French only. Let’s hope that among the paper clips, notebooks and eye glasses on someone's desk, lies a word/fragrance alchemy project with this title: Translation.