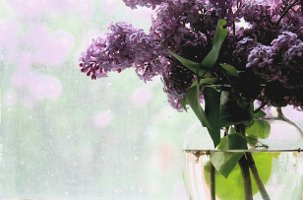 Last week I cut an armload of lilacs to bring in the house. All year I’d been looking forward to the sliver of spring when I could put them in every room of the house. By carefully balancing on my compost bin, I could even snip some of my neighbor’s darker lilacs growing over the fence for a really lush bouquet.

As the lilacs warmed in a vase on my mantle, their fragrance filled the house. I buried my nose in the flowers, breathed deeply, and thought: Glade Plug In. My flowers smelled like a synthetic air freshener! And these were real lilacs! Glade stole my lilacs from me. Now, even lilac-infused Jean Patou Vacances and Frédéric Malle En Passant have lost their appeal.

Powder is another fragrance used to make products smell delicate and clean, like a baby. (On the other hand, powder with violet, rose, or iris often smells like cosmetics.) Naturally, the feminine hygiene industry wanted their products associated with this innocent, fresh feeling, so they turned on the floral powder, creating what March at Perfume Posse christened the “Tampax fresh accord.” Since then, some unknowing perfumers have turned out fragrances that remind me of a certain time of the month.

I suspect one of the reasons a lot of people don’t like a dominant rose note in perfume is because they’ve smelled it too many other places not in the garden, so it doesn’t register as special. For instance, I stayed in an upscale chain hotel last fall that pumped rose-scented fragrance through its elevator lobby. Similarly, mint and lemon can smell like cleaning products. Mint evokes mouthwash. And how often have you smelled something lemon and thought Lemon Pledge?

Of course, different cultures probably have different associations with certain notes. I’ve seen banana-flavored toothpaste in French grocery stores. To Americans, to whom cinnamon is as daring as toothpaste gets, banana toothpaste is crazy enough to bring home as a souvenir. I don’t know what French or Japanese or Russian laundry detergent smells like, let alone their baby wipes, sanitary napkins, or furniture polish. Maybe lily of the valley is an industrial trigger in some cultures. Or jasmine.

What can we do to win back our gardens and our perfume? I know it sounds odd for a perfume writer to say, but we can minimize the reach of industry’s scent-stealing tentacles by using unscented products as much as we can. We can save our fragrant indulgences for nature and perfume — perfume we choose. A culture without canned air freshener might be a culture that really enjoys its lilacs.

*I fess up to a snobbery about Glade Plug Ins, despite the “Glah-day” television commercials. I even admit that if lilacs reminded me of Cire Trudon candles I might feel differently.

Note: image is window lilacs [cropped] by Muffet at flickr; some rights reserved.