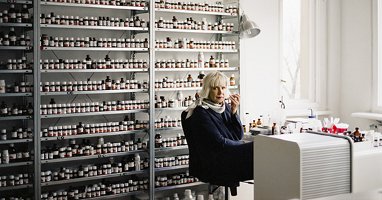 I was breathing in the air and then I started thinking: Air cannot just be something abstract. It is out there so it must contain molecules and information. So what happens if I start to analyze the invisible?

Mono.Kultur is a German art journal that devotes each issue to a single interview with a notable figure. I’ve been meaning to tell you about their special edition on scent artist Sissel Tolaas for some time now, but when I pulled it out of the envelope this summer, the scent that rose up from its pages and rubbed off onto my hands was so subtly disturbing that after ten minutes I put it away again. A month later I tried again with similar results. And so it went, until last week, when I finally read it thoroughly, albeit never for more than fifteen minutes at a time, and never while eating.

By the time I ordered my copy, I’d been following Tolaas’ work for some time. In many of her interviews, she introduces herself as a “professional in-betweener,” and a “provocateur” and I can think of no better way to summarize her. She is a chemist who participates regularly in major art exhibitions, and a globe-trotting Norwegian fluent in nine languages who now resides in Germany, when she is not in New York, Paris, Seoul, Tokyo, or Mexico City. Her Berlin lab is funded by International Flavors & Fragrances, and she has created scent logos (who knew there was such a thing?) for Adidas, Ikea, a credit card company — they wanted their cards to smell of money — and the couture line Maison Martin Margiela, but she has also used head-space technology to capture and bottle the scents of male fear, air pollution in Mexico City, the Cold War, and her own body.

She sometimes wears the latter (the ultimate bespoke signature scent if there ever was one) and describes smelling it for the first time as a shocking, fascinating, and ultimately revelatory experience that allowed her to discover herself as a human being. Then again, Tolaas is the sort of person who enjoys dressing up for a party — she’s a striking woman, tall and leggy with a chic platinum bob and bright red lipstick on her full mouth — and then spritzing on the scent of male sweat for the sheer nervy disjuncture of it. One evening, she told Mono.Kultur, disgusted by the sycophantic behavior at the premier parties of a Berlin film festival (“the small talk and ass-licking—licking, licking like small dogs”) she decided to “be a skunk” for a night, and applied a combination of accords so noxious that they created a comfortable circle of free space around her for the night.

Tolaas herself was immune to the stench because she has trained herself to tolerate even the most extreme odors. It wasn’t easy. (“I put myself through hell,” she declared passionately at a presentation I attended a couple years ago.) But she believes that our aversions to smells are learned, and that they are at the base of all our worst cultural prejudices and bigotries. Confronting those aversions — analyzing the invisible in order to transform avoidance and ignorance into acceptance and curiosity — is at the core of her most interesting work.

For “SoftWear” she solicited coats from volunteers and then analyzed the odor molecules they carried. The resulting lists of smells (the example given in Mono. Kultur reads “12% Chanel No. 5; 2% Dog Shit, German Shepherd; 5% Soy Sauce) so horrified the owners that many refused to claim their coats. Tolaas drycleaned the ones she liked and added them to her closet.

For "Talking Nose," her Mexico City project1, she interviewed residents about the worst smells in their neighborhoods — car exhaust, factory emissions, sewage systems, dumps. She captured and synthesized the smells, put the results in perfume bottles, then returned to the neighborhoods and presented them to the residents, whose reactions she filmed, the frame held tight around their noses and mouths. The "perfumes" allowed participants to identify and confront smells that had teased them for years, hovering just outside their consciousness in the background, swelling up on certain days and then disappearing again. It also allowed them to connect their own behaviors to some of the invisible pollution that normally only makes itself visible as smog and asthma.

I find these projects fascinating, but it is “FEAR 01/21—Smell of Fear/Fear of Smell,”  that haunts me. Tolaas created a small device that collected the sweat of twenty-one men2 with severe phobias during their panic attacks (she found her volunteers through a network of therapists). After synthesizing their scents, she created a special paint that encapsulated the scent in micro-bubbles. The resulting exhibition featured a blank white wall labeled simply “Guy #01,”  “Guy #02,” and so on. To release the scent, visitors had to touch and rub the wall.

Reactions were diverse. One woman fell in love with one “Guy” and visited him daily, leaving lip prints on the wall. A war veteran wept — the scent of male sweat and fear brought him back to the closeness of wartime sleeping quarters — a lost intimacy he mourned.

It is exactly the project’s ghostly intimacy that makes it impossible for me to forget. I never got the chance to attend the exhibit, but I think often about that white wall, and that seemingly empty room filled with the presence of an emotion that most of us work to conceal, even from those who are close to us. 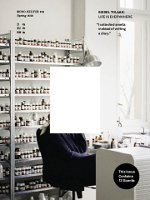 So when I read that Mono.Kultur had worked with Tolaas to reproduce some of the exhibits scents in their pages, I ordered my copy immediately. Though it featured only a few of the men in the original project, it more than delivered on its promise. The blank white pages were an excellent facsimile of the original white wall, and it included the added bonus of Tolaas’ own scent, which appears in lieu of her face.

But I did not anticipate what it would be like to have the scent of those men wafting toward me every time I turned a page, and the way it would linger on my hands long after I put the journal away, so that every time I took a sip of tea or rubbed my face it confronted me again. It was not a repellent scent, exactly. But it made me deeply uneasy, almost claustrophobic, as though the bodies that once belonged to the smells were crowding in on me and I could not turn away. Which is, I suppose, exactly the point.

The Tolaas issue of Mono.Kultur (see image above right) is still available for purchase, if you dare. To order, go to their website and send them an email on their order form page.

1. For a good write up of "Talking Nose" and a sample of the video go here.

2. There have been several iterations of the FEAR project. The one first announced on NST featured sixteen men. The announcement also features several good links to articles on Tolaas.

Note: you can watch / listen to a brief presentation by Sissel Tolaas in which she describes her work.