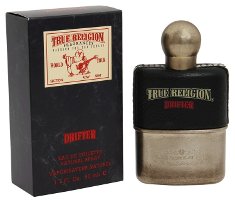 Living up to its carefree bohemian aesthetic, the Drifter scent by True Religion was inspired by the easy-going, culturally well-versed vagabond, the man who lives his life according to his own rules, the man who takes the journey at his own pace.

True Religion Drifter for Men is available in (quote via zappos, additional information via nordstrom, beautyfashion)