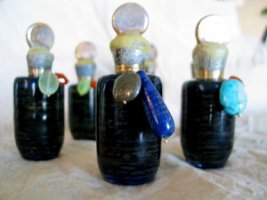 Dawn Spencer Hurwitz has launched the Secrets of Egypt collection, a series of six fragrances for the Denver Art Museum's King Tut exhibit. Two of the six are new presentations of the already-existing perfumes Arome Egypte and Cardamom & Kyphi. There are also four new perfumes: 1,000 Lilies (aka Susinon), Antiu (aka Metopion), Keni (aka the Mendesian / the Egyptian) and Megaleion:

1,000 Lilies aka Susinon ~ "Susinon was a luxurious and strongly scented lily perfume that was made by the Egyptians as well as the Greeks, but the Egyptian version was thought to “excel most’. This fabulous fragrance was also used by Cleopatra to scent the sails of her royal barge, perfuming the air along the Nile as she sailed, proclaiming herself as Goddess and Queen." With notes of cardamom, cinnamon, fragrant wine accord, galbanum, Kenya lily, narcissus, orris, pink lotus, saffron, Turkish rose, ylang ylang, sandalwood, honey, myrrh and sweet flag.

Antiu aka Metopion ~ "Antiu is the name we chose for our modern adaptation of “Metopion”, a famous Egyptian perfume that had been known some 300 years before Pliny the Elder and Dioscorides mentioned it." Featuring bitter almond, cardamom, fragrant wine accord, galbanum, lemongrass, sandalwood, rose otto, honey beeswax, copaiba balsam, mastic, myrrh, Peru balsam, pine and sweet flag.

Keni aka The Medesian / The Egyptian ~ "Keni (which means embrace) is the name we chose for our modern adaptation of “the Medesian”. The Mendesian as well as a similar and equally famous perfume, simply called “The Egyptian” was based on the three most prevalent aromatics found in ancient Egyptian perfumes: Cardamom, Cinnamon and Myrrh. The Medesian was so called as it was produced in Mendes, the royal city in ‘early times’ and later produced in the neighboring town of Thimus. It proved to be so widely used in Egypt and throughout the ancient world that eventually it’s production was appropriated by the Phoenicians. Especially popular during Ptolomeic period, it is said that Cleopatra scented her feet with the Mendesian." The notes include bitter almond, cardamom, cassia, cinnamon, sandalwood, benzoin, fragrant wine accord, Atlas cedar, myrrh and pine.

Megaleion ~ "Perhaps the world’s first “designer fragrance”... Although the origin of this scent is not entirely clear, it is said to be named for the inventor, one ‘Megalus’. It could also be named for the place, Megale near Syracuse, where it was allegedly prepared or simply to reflect the degree of it’s importance as megalos means ‘great’. By the time of Pliny the Elder, Megaleion had achieved a kind of celebrity due to it’s extreme cost, complexity of ingredients and the painstaking method of it’s production." The notes feature cardamom, cassia, cinnamon, fragrant wine accord, lemongrass, sandalwood, balm of Gilead accord, spikenard, Turkish rose, copaiba balsam, costus, myrrh, frankincense, Peru balsam, pine and sweet flag.

The Secrets of Egypt fragrances are available in the limited edition Mummy presentation bottles as shown above (hand blown glass adorned with gemstones, $275) or in 15 ml flasks ($90); other options, including samples, are also available. (via dshperfumes)