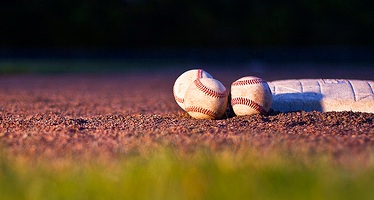 About the author: In public a conservative accountant, in private Mals slips on her magic footgear and becomes the writer of the blog Muse in Wooden Shoes. Mals lives on a farm in Southwest Virginia with her husband, where they raise hay, cattle, and three children.

As we Americans celebrate the beginning of our nation on Independence Day, I think it's appropriate to focus on that most American of sports, baseball. Long identified — along with motherhood and apple pie — as the quintessence of America, baseball continues to hold an eminent position in the United States. Baseball phrases (“Three strikes and you're out!” or “Step up to the plate!”) pepper our speech. Major League Baseball is a multibillion-dollar industry. Baseball heroes like Lou Gehrig, Jackie Robinson and Babe Ruth are instantly recognizable figures. And every little community seems to have its own baseball field, even if it's only an empty lot with four rubber mats serving as bases.

I came to the appreciation of baseball later than many people do: soon after I married my husband, I realized that I had actually promised to “love, honor, and allow him to watch baseball on TV,” whether that wording was technically in the ceremony or not. Thanks to diligent spousal coaching, I've learned the rules and guiding principles of baseball, as well as some strategy, alongside our kids, and I love going to games. I say confidently that baseball is great if you understand what's going on. Also, no matter how interesting the actual game is, it's always rewarding to immerse your senses in the setting of the game.

If you're playing, I'm told, baseball is a richly olfactory experience. It's played outside on dirt and grass surfaces, and the equipment used is often made of natural materials — gloves are leather and bats are wooden, at least in the major leagues. Chewing tobacco, long a vice of baseball players, has fallen out of favor over the last decade or so, replaced by chewing gum. At any point, a player might be smelling some combination of these things: dirt, freshly cut grass, the chalk used to mark baselines and the batter's box, fresh air, polished wood, the pine tar that gives a batter a good grip on his bat, leather, the neat's-foot oil used to condition gloves, sweat, tobacco, bubble gum and a plethora of food smells from the concession stands. My kids say that baseball, to them, also smells like Gatorade and roasted sunflower seeds, the local snack-of-choice.

If you're just watching, however, a baseball game is interesting sniffage. Exactly what you'll smell might differ depending on what kind of game you're attending, but it all smells good.

All of my kids have played baseball or softball for the local recreational league, and I've got a lot of experience with that kind of game. If somebody's playing at Loving Field, I know to bring my folding chair and a cooler full of drinks, because there aren't any bleachers or concessions. When the game gets dull — good ten-year-old pitchers are rare — I can just watch the corn grow on the other side of the fence. The smell of drying hay wafts over to me, and the cicadas buzz. There are the usual shouts from coaches and parents: “One down, play's at first!” and “Be a hitter, son! Pick ya out one and give it a ride!” If the game's at Randolph Park, I take a towel to cover the aluminum bleachers. The concession stand is open on Saturdays, serving hot dogs and soft drinks. The park is dotted with black locust trees, and in early June it smells like Parfums DelRae Amoureuse. At intervals, a freight train chugs along the edge of the park, clacking rhythmically, wheels squealing on the rails.

If, however, you've bought a ticket to watch a baseball game, what you'll likely be smelling is food. Mostly it's food that's bad for you, too, which we all know tends to smell amazingly good: hot dogs with chili, pizza, chicken fingers, brats with onions and peppers, cotton candy, soft drinks. Sometimes there's beer, with its salty-savory, yeasty smell.

So what does the baseball spectator with an interest in fragrance wear to the game? There are several different tacks to take here, and it depends, mostly, on what you like. Traditional colognes and citrus-woody scents, are, of course, cool and refreshing in the heat. Another way to go, if you like this sort of thing, is a light floral or even a fruity floral; you'll enjoy simply smelling nice without having to think much about it. I contend that fruity florals have their place, and a summer outing with the sole objective of fun is it, so I take advantage of that. Another choice might be your favorite “trashy fun” scent: if it smells great but somehow seems wrong for work, or is too frivolous for your everyday activities, it's probably a candidate here. One last category for consideration is a quietly meditative scent, perhaps woods or incense, that clears your mind of inessentials and prepares your attitude for the Zen of Baseball.

And what not to wear? Well, I think it's rather a waste to wear something intellectual or rare, something that I'd like to concentrate on, because then I don't think I'd get the benefit of either the game or the perfume. Also, even though most baseball games are outside, crowd conditions still apply, and if you're just dying to wear a sillage monster, please, I beg you, apply discreetly. The person sitting in the seat next to you may not appreciate your sultry oriental as much as you do.

A baseball park is a real feast for the soul, with its sights and smells and sounds, and the inescapable feeling that when one is watching a baseball game, one is really watching a microcosm of life. As they say in Bull Durham, in my opinion the Best Baseball Movie Ever, “Baseball is a simple game: you throw the ball, you catch the ball, you hit the ball. Sometimes you win. Sometimes you lose. And sometimes, it rains. Think about that.”

Note: image is Summer [cropped] by Kyle Kruchok at flickr; some rights reserved.