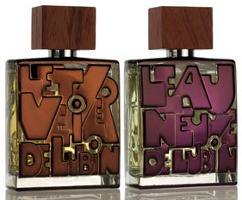 French niche line Lubin has launched four new fragrances — the Métalliques collection — inspired by the "olfactory themes" of their Vétiver and L'Eau Neuve fragrances. Itasca and Bluff are versions of Vétiver, Figaro and Inédite of L’Eau Neuve.

Bluff (not shown) ~ "The composition is inspired from the invigorating remedies supplied to the pioneers in the Wild West during the gold rush. Once developed by emigrant physicians, these tonics were first considered as medicines. They would soon become a part of American culture, and later be transformed into soft drinks for young people." With notes of lime, bergamot, nutmeg, cinnamon, clary sage, iris, kola nut, vetiver, cedar, patchouli, sandalwood and vanilla.

Lubin Itasca, Bluff, Figaro & Inédite are available now at Aedes, in 75 ml Eau de Parfum for $110 each. (quote in first paragraph via shopping-premiereavenue, all subsequent quotes via aedes, additional information via extrait.it)