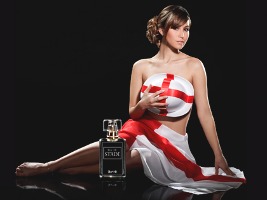 Sky+HD, a UK-based high definition tv service, has launched Eau de Stade, a new limited edition unisex fragrance for the 2010 FIFA World Cup. The scent is fronted by British pop star Rachel Stevens; the ad is apparently an homage to the Keira Knightley ad for Chanel's Coco Mademoiselle. Per John Bailey of The Perfumers Guild, who developed the fragrance...

...The fragrance not only hits the back of the net with the classic scents of football from around the world, but also the aromas of the host nation.

Salty notes have been used to encapsulate the smell of the fresh sea breeze in Cape Town- known as the 'Cape doctor' - alongside woody, smoky hints to represent the nation's passion for barbecues, and also Tagette, an essential oil sourced directly from South Africa.

Eau de Stade is £19.99, and can be purchased at Soccer Scene's World Cup pop-up store in London. (quote via uk.news.yahoo, additional information via brandrepublic)