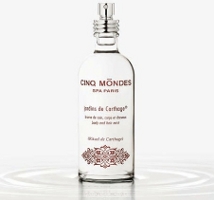 So let's say you're looking for the lightest of light summer fragrances, just a little bit of something so you don't have to go entirely scent-free on the hottest and most humid of days, but you're tired of citrusy Eau de Colognes. You could do worse than to investigate the fragrance mists from French spa line Cinq Mondes. The first in the series was Eau Egyptienne, a sheerest-of-sheer (but long lasting) spicy floral incense by perfumer Olivia Giacobetti that's been on my "buy" list for nearly forever. At one time, it seemed to be something of a cult favorite, but I don't hear it mentioned very often these days. They followed Eau Egyptienne with a collection of five aromatherapy fragrances called Pluie d’Arômes — these were formulated more like traditional Eau de Toilettes (and they cost more than the Eau Egyptienne).

Now they've added Jardins de Carthage, developed by perfumer Marie Salamagne and inspired "by the perfumes of the legendary founder of Carthage, Queen Elissa...[who] surrounded her palace with lush gardens". Like Eau Egyptienne, it's meant to be sprayed lavishly, not dabbed on pulse points, and you can use it as a body, hair or linen mist; if you're after any kind of sillage at all, you'll want to spray it on your skin, your hair and your clothes. You can also keep it in the refrigerator for a cooling effect.

The opening is a spiced citrus, quite peppery and lively; the heart is a pale and sheer (but still spicy) floral blend dominated by a soft rose. The base is woods, reportedly oud and cedar, and while it's still more transparent than not, the oud gives it a bit of depth. As advertised, it's refreshing and relaxing, and like Eau Egyptienne, makes a nice change for those days when you're just not in the mood for a "real" perfume. The lasting power is reasonable for a body mist, especially on clothing where it lasts for a good part of the day. And despite the queenly inspiration, it's perfectly unisex.

Cinq Mondes Jardins de Carthage is available in 100 ml, $65. They eventually released Eau Egyptienne in a 15 ml size ($25), and I hope they do the same with this one: it would be a nice thing to keep in your purse. The notes include nutmeg, bergamot, pink pepper, rose, jasmine, oud and cedar. For buying information, see the listing for Cinq Mondes under Perfume Houses.