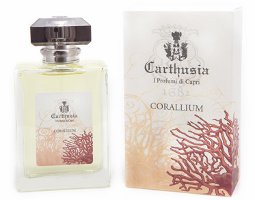 Corallium (shown) ~ "…there is Perseus, unchaining Andromeda, naked from her tidal rock, and laying Medusa’s head upon the ground, blood spurting from her severed neck, staining the water of the sea, from which grew coral. [...] It is from nature, and in particular from the resources of the Mediterranean, that Corallium gains all its fascination, producing a perfume of rare intensity and sensuality, perfect to gratify the most demanding connoisseurs." Featuring notes of bay, myrrh, mandarin, bergamot, patchouli, cedar, sage, musk and tree sedum.

Carthusia 1681 ~ "In 1681, once the reconstruction of the Charterhouse was complete, the monks of Capri began to prepare the first perfume essences based on local herbs and spices. Since then, even though much has changed, the fine craft care and rigorous observance of natural methods have remained substantially the same. Carthusia means Charterhouse and Carthusia Perfumes are still prepared with the fragrances and aromas that the island continues to produce. These unique values are brought together in 1681, the rich new essence in which a thousand different intensities converge into a sensation of refined complexity." The notes include mandarin, bergamot, coriander, red thyme, rosemary, iris, neroli, lavender, petigrain, black pepper, sandalwood, cedar, incense, amber, vanilla and musk.

Carthusia Corallium and 1681 are available in 50 and 100 ml Eau de Parfum. The larger sizes can be found now at First in Fragrance in Germany. (via intertradeurope)