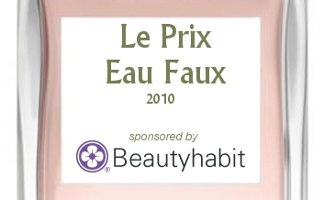 Here they are, the finalists for the 2010 Prix Eau Faux, our contest to honor creative fragrance writing or “faux ad copy” (you can read about the contest here). Huge thanks to everyone who entered!

The judges (me, Angela, Christine, Kevin, Erin and Jessica from Now Smell This, and Tania Sanchez of Perfumes: The Guide) have whittled the field of 65 entries down to 5 finalists.

In order to make this as fair as possible, I won't post the names of the entrants until after the winner is selected, and I respectfully ask that the entrants not “campaign” for votes here or elsewhere…just let the best entry win. Votes will be taken through 11 pm (Eastern Time) Thursday, and I'll announce the winner on Saturday.

Here are the entries, presented in the order in which they were received:

Apple has revolutionized the world through technological innovation, through products such as the iPod, iPhone, and most recently, the iPad. Now, Apple has accomplished the ultimate achievement by bottling Steve Jobs’ patented reality distortion field into a new fragrance: iSmell. Not only is iSmell the first fragrance with Apple’s Multi-Sniff technology, but iSmell is covered by over 200 patents worldwide. It features notes of Macintosh Apple, Forest Stewardship Council-certified woods, and 18 secret ingredients. Also, iSmell is housed in a unibody aluminum enclosure originally developed for the MacBook Pro.

Apple iSmell is available immediately at Apple Stores and Sephora for the price of $179 for 30 mL and $279 for 50 mL.

Divine Discharge
Dewdrops and boreal moss slumber beneath Polaris’s gaze as the Sovereign Illuminator crests the Arctic horizon on a coach of solar wind. Northern Lights blow violet atoms across gossamer pinwheels to meet rising banks of rubicund steam—smelling, for all the world, like Dom Perignon ejaculated over molten iron ore. Volcanic earthen ovens fuse with the night sky in varicose braids of citron radiance, slagging shards from the firmament as charcoal candy to coruscate against clouds of semolina ash.  “Divine Discharge is perfect for today’s boardroom, bedroom, barracks, and bridal circus,” declares Ms. Feminista, who offered to breastfeed other women’s children during a recent promotional visit at New York’s Saks Fifth Avenue.

Born of Friedrich Nietzsche’s assertion that “"The irrationality of a thing is no argument against its existence, rather a condition of it," Parfums Irrationalité offers a series of fine eaux de parfum inspired by the thoughts, lives, and Weltanschauungs of 18th- and 19th-century German philosophers. One drop will enable the wearer to experience the apotheosis of Nietzsche’s mountain summit, the daring critique of Kant’s pure reason, or the sweetly fussy playfulness of Schopenhauer’s beloved pet poodles.

Ecce Homo, the first Parfum Irrationalité, is dedicated to Nietzsche. It opens with a browbeating bouquet of bitter mountain herbs laced with Sturm-und-Drang, a reminder that only through suffering can one achieve greatness. The greatness of Ecce Homo soars in its heart: A triumphant accord of icy gray Alpine wind and golden sunset musk. But all is thwarted as the drydown descends into a syphilitic mental cacophony of dying lichen and Prussian churchyard earth. A matching deodorant is also available.

Squeeze the bulb atomizer … a Gatling gun volley of sparkling aldehyde molecules with the hangtime of a Dennis Rodman signal the mischievous Pucks of Perfume to start their fragrant game by toppling a wicker trug chock-full of Parson’s Pink Roses whose petals tumble as confetti, alighting on the surface of a Waterford punch bowl brimming with Schmitt Sohne Rheinhessen Eiswein whose overflow saturates a scroll impressed with Robert Browning’s “Heap cassia, sandal-buds and stripes,” causing the lambskin parchment to grow lax and unfurl until it extinguishes a Rafael Gonzales Cuban whose last bit of ash tumbles and lies smoldering on the English Regency leather desk where many a pretty French maid has diaphoresed owing to the little death.

But he poured his time and energy, the entirety of his family fortune, and the rarest and finest ingredients from all over the world, into something that would be unforgettable. And after ten years of toil in a hidden room, he had it...

He meant it to poison the town's water supply, but once its enticing scent had wafted up, mesmerizing his commodious nostrils, he knew that, instead, it would be his signature scent for the rest of his life...

(Some persons may experience a slight tingling effect on your skin, which is only temporary...we think.)

Update: the poll is now closed and the winner will be announced on Saturday. Thanks to everyone who voted!