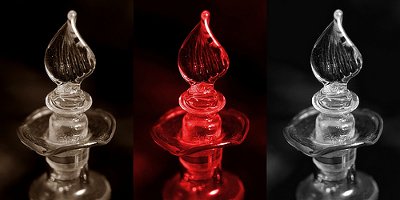 Somehow, as so often happens, my thoughts drifted from quizzes to perfume. Could the great, iconic perfumes symbolize personalities? Could everyone identify as one of them? I thought about Chanel No. 5, Jean Patou Joy, and Guerlain Shalimar. Each has a distinct and different character. Toss in Thierry Mugler Angel and 4711, and we may have covered almost everyone.

To get an idea of how I see the personalities of each perfume, imagine a large room — one with solid ventilation, since it will be fragrant in there. In one corner are the No. 5s sitting on little gold banquet chairs around a table. In another corner are the Shalimars, and so on, until we get to the 4711s in the middle of the room.

The No. 5s are mostly blond, some natural, and some expensively manufactured. Their legs are perfectly shaved, even the difficult knee region, and their handbags are free of scuffs. They're drinking Champagne with their salads and talking about small dogs. Their  lights sparkle off their diamond rings as they check their Blackberries (not so many iPhones here).

The Joys are brunette and smile a lot. They wear pearls and dress conservatively but femininely and are genuinely happy to see each other. They like cashmere, silk, and are more likely than the others to be allergic to wool. They order Crab Louis and chocolate mousse and hug each other and show pictures from their family reunions. The Joys make the best mothers.

The Angels are wearing pink stilettos and talking loudly and laughing, and although no one seems to be listening. They're having a great time. One of the Angels wants to go ask a No. 5 for the number of her colorist, but the No. 5 shoots her a "keep yourself and your surgically enhanced rack away from me" look. A few of the Angels are getting antsy because they want to go out for a cigarette. The waiters seem to pay an awful lot of attention to the Angels.

The Shalimars' corner is thick with smoldering glances, untold stories about ex-lovers from foreign countries, and battered but expensive handbags. The Shalimars are good eaters and tend to swap bites with other people at the table. One of the Shalimars is showing another how to read fortunes from the residue of a dirty martini. The Shalimars tend to have the highest concentration of philosophy and French majors.

The 4711s are calling over the manager because one of the Angels just lit up. Frankly, the 4711s would rather be playing golf or doing some autumn clean up in the garden instead of wasting time in this smelly room. They're eating a well balanced meal, drinking iced tea, and comparing book club choices. The 4711s are the ones you'd trust with your stock portfolio.

Few people will fit seamlessly into one of the categories. For instance, Madonna probably thinks of herself as a Shalimar, but she's really an Angel with strong 4711 tendencies (as are most drag queens, I'd guess). Angelina Jolie is a Joy with a pinch of Shalimar. Five years ago, it would have been the reverse. Instead of being a No. 5, I think Marilyn Monroe was a Joy with a strong hit of Angel.

Which perfume are you?

Note: image is Potion or Poison? by Athena's Pix (Busy again) at flickr; some rights reserved.