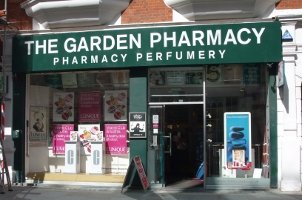 In continental Europe, there’s a kind of boutique you find in every town and city. It sells a couple of high-end cosmetic / skincare lines, and an eclectic mixture of perfumes. Every boutique is different. It’s always a bit of an adventure.

In the UK, you rarely find such shops. You get the occasional ambitious chemist (pharmacy), stocking perfumes and blusher along with the bottles of antacid and chilblain plasters. The nearest thing to the continental boutiques is the national chain, Boots, but of course they all stock much the same thing. There’s no adventure.

One place that follows the European model is The Garden Pharmacy, round the corner from Covent Garden. It doesn’t look much from the outside, and it’s not as glossy and elegant as the European boutiques, but it’s an independent store with an entertaining range of cosmetics and especially perfumes.

The perfumes aren’t easy to get at — they’re on shelves behind the counter, so you often have to ask for testers. The selection is scattered — some niche-y lines, a lot of mainstream, and the rest consists of perfumes you haven’t seen for years and didn’t know they still made. Some are probably available from discounters in the US, but others are dusty old boxes that have presumably been sitting there since before citrus absolutes had to be replaced by chemical formula. I mean, there are some REAL chypres to be found here.

The Garden Pharmacy is also a good place to get hold of new releases that aren’t yet being offered in the big stores (usually because they’re waiting for a big launch). This is very satisfying.

Fragrances: Too many to list, but worthy of note are Je Reviens, Juliette has a Gun, Parfums Gres, Parfums Weil, Royal Secret, 4711.

Getting there: Nearest tube is Covent Garden, which is a lift-only station (there are no escalators). It’s a short walk from Charing Cross train station.

Not to be missed: Covent Garden.

Nearby: Les Nereides is right across the road.