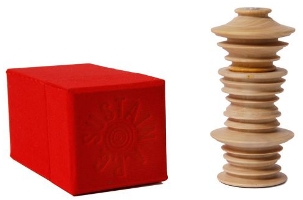 The mere idea of making a perfume turns me off. I find this vulgar and gross. One of the reasons is that there are quite a few good ones around already. If push came to shove, I would have thought about some Cologne reminiscent of industry, in a tin bottle; and that would mean something like… ‘This is it, no kidding’. I haven’t got a clue to what “it” stands for, by the way. So, no perfume in sight.

Then one day in Los Angeles I meet a girl who blends essential oils and displays them in little wooden boxes containing glass bottles containing the oil. I find this a bit too feminine, this idea of essential oil, the way you apply it and the tiny quantities involved, the price, the size of the bottle.

Definitely girls stuff. I nevertheless sample some, and it quickly becomes first pleasant then necessary, before this new obsession turns into an addiction.

I then decide to ask Haley Alexander Van Oosten who has become a friend to sell me one of her blends in one of her wooden bottles so that APC may have some in it shops, she turns this offer down, and asks to speak to me.

A whole afternoon is spent talking together, she does say a lot of things to me, including about the world of smells. She then suggests making a specific APC blend, based on what she knew about me. As I had really appreciated her idea of a little glass bottle inside a wood container, I speak about it to M/M: we decide to stick to the same idea, definitely, but without copying Ms Alexander Van Oosten. I can’t recall whether it was M or M who actually said: there are two ways of drawing a great shape, either we all take drugs and draw, and then choose which is the best, or we take an abstract idea as a starting point, and this will lead to something equally beautiful too as it is telling a story without being too explicit.

From the start this quest for smells had been linked to music, as one of the ideas I had expressed to Haley was the perception of the smell of a guitar case —lined in bright velvet— in which rose petals would have been scattered.

Thus taking music as a starting point, we decide to look at the outcome of the opening chord of Ray Davies’s song “Waterloo sunset” played on a 12 string guitar (there are 12 essential oils in Sustain) on a computer screen. We can see a wave, we print it, we draw it again, and with this drawing we leave for Jura, to meet craftsmen specialised in box wood turning. The bottle containing the bottle was born there, in a folk art garage.

The name Sustain comes also from music… it’s the name of a pedal which enables sound to continue. When you push on this pedal, sound lasts longer: the evanescent has more time to be around.

Sustain, Sustained, Sustainable: words I fully trust, which have a lot to say on duration and being persistent. This blend of essential oils has the same effect on me. The smell stays on the skin during the required time, this persistence is reassuring.