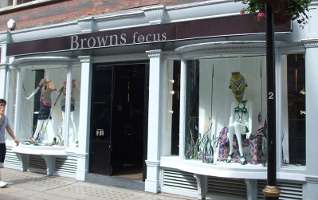 Browns is a slightly difficult enterprise to describe. It’s kind of a stiff-upper-lip British version of Colette in Paris; self-consciously serious about high-end fashion — clothes, hats, shoes, bags, fragrance. Browns carries lots of established names as well as hot-stuff newbies, but it offers only selected items from those designers, and changes direction fairly often. It’s the place where future creative superstars get discovered.

Browns’ principal base is in South Molton Street, off Oxford Street, but even here you’re thrown into artful confusion. There’s a main store, which consists of several terraced buildings linked together in a labyrinth of passageways. Across from here, there’s a shop called ‘Browns Focus’, which offers cutting edge clothes ‘for the woman who likes to dress with attitude’. Further down South Molton Street, there’s ‘Browns Labels for Less’, which is essentially the outlet store. Elsewhere in London, there’s Browns Bride and Browns Shoes. 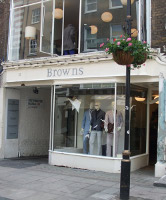 Browns is a useful source of niche fragrance. Unlike other stores, though, it changes its lines according to what’s hot at the time, so anything I tell you about the lines they carry right now, may be out of date in a couple of months’ time! Additionally, the products are spread across the various stores, so you may need to do a bit of exploring to hunt them down.

It’s often worth the effort. Browns currently seems to be the only UK stockist of the Heeley line, not to mention the Boudicca Wode ‘paint’ perfume. They also stock the Christian Dior colognes, the Escentric Molecules line, and assorted candles (Jimmy Jane, Ladurée and Cire Trudon).

It’s worth checking up what they’re carrying presently by looking at the website. As far as I can tell, they ship internationally.

South Molton Street is pedestrianised, which makes it a pleasant shopping experience, especially right in the centre of London.

Getting there: South Molton Street is south of Oxford Street at Bond Street tube station.

Nearby: The Butler & Wilson shop is a few steps down the street. (Simon Wilson designs costume jewellery and clothes of outrageous blinginess– Princess Di was a fan.)

There’s also a Space NK on the street.

It’s worth making the short walk to Selfridges on Oxford Street.