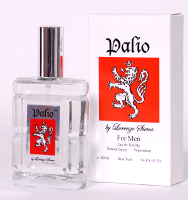 Lorenzo Siena has launched Palio, a new fragrance for men:

"Palio", by Lorenzo Siena, our first fragrance "launch", is translated from Italian as "winner" or "prize". It is a uniquely different scent which has instantly captured the men's fragrance market.

We have combined only pure natural fragrances such as sparkling citrus with ivy greens and cool mint leaf. To this we have added a touch of iced lavender, jasmine with a hint of sandalwood, patchouli with other precious oils.

Lorenzo Siena Palio is available in 100 ml, concentration unknown, and can be purchased at the Lorenzo Siena website. A second scent for men, Palio Gold, is expected to launch in early 2009. (via press release)