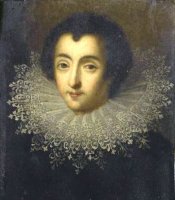 Santa Maria Novella’s Marescialla fragrance was named after Léonora Dori Concini, La Maréchale1 d'Ancre, who was beheaded and burned at the stake in Paris on July 8, 1617, after being convicted of sorcery.

Or so I think. Santa Maria Novella’s description of Marescialla reads: “This unusual perfume was created by a French noblewoman, the Countess D'Aumont, wife of a Marshal of France, who used it to scent her gloves. It is said that because of her interest in alchemy, she was charged with witchcraft and burned at the stake.” After some research, I could find no mention of a perfumer-witch-alchemist named Countess/Maréchale d’Aumont. To confuse matters further, Crown Perfumery once made a perfume named in honor of La Maréchale d’Aumont (a non-witch) — Maréchale 90 — based on a recipe from the 1600s.

I expanded my search for the elusive Maréchale (Marescialla in Italian) and after reading an opera libretto, a play, some Voltaire, a brief history of the Marshals of France and records of witchcraft trials in France and Italy, I believe she is none other than the Italian noblewoman and wife of Le Maréchal d’Ancre: Léonora Dori Concini, La Maréchale d'Ancre. We’re back where we started!

La Maréchale d’Ancre, also known by the name Galigaï, was the wife of the powerful Maréchal d’Ancre, Concino Concini, a minister in the court of Louis XIII. Louis had “mamma issues” and hated the fact that Concini and Galigaï were in cahoots with the Queen Mother, Marie de Medici (Galigaï’s foster sister). While serving as regent to the young king, Marie promoted Concini to powerful positions in government, and Concini alienated Parisians of all classes by using his power to gain wealth and spy on anyone he deemed a threat to his high status at court. In 1617, four years after Concini became a Marshal of France, Louis XIII had him killed and his property seized, and the Queen Mother was exiled from court.

After losing her husband, La Maréchale d’Ancre was abandoned by Marie de Medici too, and without any protector, she was charged with the crime of witchcraft — accused of using otherworldly powers to influence Marie de Medici. In court, it was alleged that La Maréchale visited known witches (who were apparently allowed to go about their witching business freely!), consulted seers and astrologers, and sacrificed albino roosters in cathedrals. Jealousy and revenge fueled the criminal proceedings against La Maréchale and after being found “Guilty!” she was asked by the judge what spell she had used to control Marie de Medici. Calmly, La Maréchale said a strong heart would always control a weak mind…no spells were necessary.2 Touché!

Marescialla Eau de Cologne is bewitching and, to me, comforting because it smells like my grandmother’s apple pie — without the apples. My grandmother seasoned her apple pies with lots of lemon juice and zest, nutmeg and a generous sprinkling of mace; her apple pies were spicy-hot. Marescialla smells of ‘fiery’ mace and lemons and it seems to be a love-it-or-hate it perfume (some of my friends say it smells like furniture polish). Since La Maréchale (supposedly) used the fragrance to scent her leather gloves, I layered Marescialla with Knize Ten and the result was bracing and good.

Marescialla is a ‘simple’ perfume, but the battle for supremacy between its pungent mace and tenacious lemony notes makes the fragrance’s development interesting. Marescialla’s citrus note — waxy, intense, and in a strange way “antique” — lasts and lasts.

The life and death of La Maréchale d’Ancre inspired writers, musicians, and, perhaps, Santa Maria Novella. I have no idea if La Maréchale d’Ancre (or any maréchale) actually created the Marescialla fragrance, but it’s interesting that in some books of witches’ spells, Marescialla’s main ingredient, mace, is recommended as an agent that increases psychic abilities and mental prowess. A coincidence?

Marescialla is $110 for 100 ml; for buying information, see the listing for Santa Maria Novella under Perfume Houses (request a spray nozzle with your order if you do not like “pour” bottles).

1. The title ‘Maréchale’ denotes the wife of a Marshal of France (Maréchal de France).

2. The only attribution for this quote is from Voltaire, whose own source for the witty line was not disclosed.