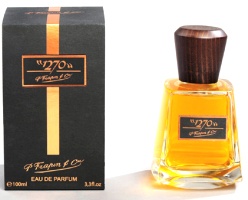 Frapin is reissuing the cult favorite 1270, a 2002 release which has been missing in action for about a year. The new packaging matches that used for the four fragrances they released last year (Terre de Sarment, Esprit de Fleurs, Passion Boisée & Caravelle Epicee).

1270 was inspired by the scent of cognac, and was named for the year the Frapin family settled in the Cognac region of France. The notes include exotic woods, spices, raisin, vine flowers, pepper, candied orange, nut, hazelnut, prune, cocoa, coffee, leather, woods, white honey and vanilla.

Frapin 1270 is available in 100 ml Eau de Parfum, and can be pre-ordered now at Luckyscent (to ship in mid-October). (via luckyscent, found via sfilate.it)