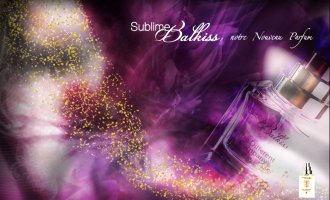 Sublime Balkiss is the lastest from perfumer Celine Ellena at The Different Company. The modern (i.e., oakmoss-free, i.e., not chypre-ish) chypre fragrance was named for the Queen of Sheba, and features two kinds of patchouli: the traditional essence, and a "modified modern patchouli" which emphasizes the cocoa powder notes.

Sublime Balkiss opens on a veritable berry-fest: it's juicy and rich, like a dark berry liqueur with a touch of sparkle (the notes, in addition to the patchouli: bergamot, violet, blueberry, blackberry, blackcurrant, lily of the valley, rose, lilac). The base is dry, earthy-woody and smooth, with hints of spice but only very subtle cocoa, rather like Thierry Mugler Angel with the candy tamped down and all the rough edges polished off. You'll pick up some flowers here and there (I mostly noticed the rose), but to my mind, it's all about the berry and patchouli. And the patchouli, by the way, tilts considerably more towards the "modified modern" than the "traditional"; in other words, don't be surprised if it doesn't really smell all that much like "patchouli" to you.

The Different Company is advertising Sublime Balkiss as a "surprising fragrance, with a familiar touch to it", and that's spot on; there's nothing terribly unusual about it except that it's so fantastically well-done. It's another descendent of Angel without being anything like a copy, and it could also be the more sophisticated, less commercial (and so of course, pricier) version of scents like Donna Karan's DKNY Delicious Night. Despite the fact that the very thought of berries + patchouli pretty much turns my stomach, I found it extraordinarily likable; if berries + patchouli sounds right up your alley, it's a must try. I'd wear it happily if a bottle dropped from the skies, and if one should drop from the skies wearing the spiffy but obviously useless leather case (see image at right, available in a range of colors from black to pink), all the better.

The Different Company Sublime Balkiss is available in 50 and 90 ml Eau de Parfum. For buying information, see the listing for The Different Company under Perfume Houses. As of this writing, it has not yet launched in the US (and I heard it might not get here until 2009?) but it can be found now at First in Fragrance in Germany.