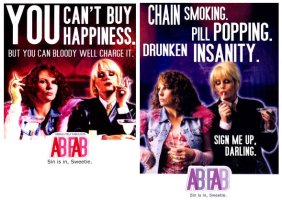 Your challenge for today: scent Patsy & Edina. Or anyone you like from Ab Fab — Saffy? Bubble?

I'm running late (as usual) and so haven't got an answer of my own. I meant to come up with suggestions last night, but hey, I was too busy watching TV. I'll try to think of something and add it to the comments later.

What is your favorite (currently running) comedy show? I'm watching The Office (I liked the British version better, but the US one has grown on me). I also follow Flight of The Conchords and Curb Your Enthusiasm as new seasons are released on DVD.

What shows, books, or other topics would you like to see featured in a lazy poll?