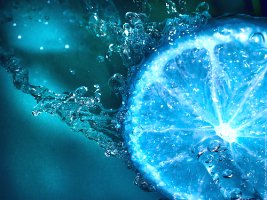 Until six months ago, I was living in a semi-arid, high plains environment and I had forgotten what humidity was like. Returning to the area where I grew up has meant returning to Humidex (humidity rating) values and the cloggy, bilgy pockets of air that wallow around an Eastern city. I don’t sweat very much and personally prefer a little swampiness to the near constant gritty wind I encountered out west, but there is only so much stagnant heat a girl can take. During the muggiest days of our summers, I have noticed that a certain portion of the population in Toronto manage to affect a sort of languid, fanning Southern Belle attitude. Those of you who know me — either through online interaction or in what we now rather charmingly call “real life” — will be able to guess I have no ability or desire to pull such an act off. The Canuck obsession with endless discussions of the weather is a long-standing source of humour in my country, so while I indulge myself occasionally, I mostly try to just slog my way through heat in silence, washing my face three times a day and sleeping with a fan roaring into my ear.

One of the few benefits of the closest days is that the low sillage and lasting power of some of your favourite scents no longer seems like a drawback. When every opened door or sluggish second of breeze means you encounter the smells of both yourself and everyone around you, a linear, gentle and smiling scent seems like common sense and courtesy, rather than lack of imagination. Smelling the many colognes and eau fraîches released each year to the market also makes you realize exactly how difficult it is to make something straightforwardly fresh that still smells good. Listed below are five scents that have stood up to the challenge of a humid subway tunnel without wilting.

Guerlain Eau de Fleurs de Cédrat: This fragrance smells extraordinarily like homemade lemon simple syrup mixed with sparkling mineral water — and lasts about as long as such a concoction survives in this household (mere minutes, you understand). Still, the scent is so mouth-wateringly refreshing that it is hard to complain about only getting half an hour of glory.

Etro Anice: People have different sets of notes that call to them as the mercury rises: some, like Kevin, need a soapy freshness, others feel the need for tea-based fragrances. I crave anisic scents and none fits the bill quite like Etro’s Anice. Starting a bit chewy, like those Zouts or dropjes (salted liquorices) that the clearly crazy Dutch eat — the things smell nice, but they taste like road tar! — Etro Anice remains startlingly linear throughout, finishing with a faintly powdered anise-musk. Lovely and carefully crafted in a way that makes you notice the indistinct, tired quality of so many of the pale bases in mass market fragrances.

Thierry Mugler Miroir des Vanités: There seems to be so little love in perfumanity for Mugler’s new set of fragrances that I almost feel obliged to keep mentioning the three I like. While I can’t see myself wearing Miroir des Envies or A Travers le Miroir often, I may eventually have to purchase Miroir des Vanities, a fizzy, bitter-bright cocktail, tinted a perfect cool shade of green. If you are looking for effervescence that lasts, this is a rare option.

Comme des Garçons 3: This one stands out in the bizarre, boisterous stable of Comme des Garçons fragrances for being relatively hushed. Minty, dry and as powdered as incense ash, 3 smells simultaneously odd and familiar. It has the sort of charm that creeps up on you and is therefore perfect for a day when you need to mop your brow with the back of your hand.

Creative Universe Té: Not your standard, brightly stylized summer “thé” but a weird, clean tea realism. Somehow the sweet floracy of ylang ylang, the poultry seasoning blend of celery seed and clove and a mysterious hint of craft paste all add up to the smell of a fresh bag of tea. Don’t ask me how it works, but I love it.

Note: image is liquid ice by atomicshark at flickr; some rights reserved.