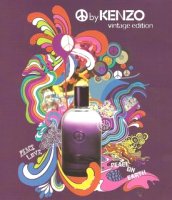 Kenzo's latest is Vintage Edition, or more properly, ☮ by Kenzo Vintage Edition (that's a peace symbol, for those of you who don't have a browser capable of rendering one). It's a unisex fragrance, launched in honor of Kenzo's 20th anniversary as a perfume house:

The 1970's witnessed the arrival of Kenzo Takada on the Parisian fashion scene. To celebrate this era of exploration, life, and daring creativity, Kenzo reinvents the scent of the seventies with a limited edition unisex fragrance that captures the essence of freedom. (via kenzousa)

The essence of freedom — who doesn't need some of that? Vintage Edition was developed by perfumer Annick Menardo (who was also responsible for the 1999 limited edition Kenzo Time for Peace for Him), and features notes of musk, heliotrope, cedar, tonka bean, vanilla and mandarin. After brief citrusy-vanilla opening, heliotrope is pretty much the star of the show. The heart vaguely recalls cookie dough ice cream, but that makes it sound sweeter and heavier than it is — in keeping with the unisex target, the sweet notes are tempered by dark earthy woods in the base (with vague hints of something almost-but-not-quite-leather), and Vintage Edition, while not something I'd wear on the hottest days of summer, has a gauzy finish that doesn't overwhelm. Still, it's a creamy-woody comfort scent more than anything — it could be the masculine version of Kenzo Amour, or, for that matter, the cleaned-up (or dumbed-down, depending on your outlook), feminine version of Bvlgari Black.

It's a fine scent, and while there's nothing daring about it, it's perfectly wearable. I'd wear it if I had some, but I can't say I'm moved to buy it — there are many more interesting creamy-woody comfort scents to be had. Which is too bad, because if, like me, you still retain some fondness for 1970s flower power design, the bottle is a keeper, and the outer packaging (there are four different box designs) is fun too. But what I like best of all is the ad (shown at top), and I kind of wish they'd done an equally wild bottle with more color.

The lasting power is very good (as with Monday's Bvlgari Jasmin Noir, I could still smell it the next morning), but it wears a bit close to the skin after a couple hours.