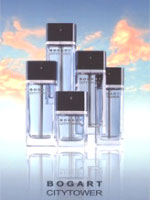 In heart of the world's most captivating metropolises, there is no great name that is not associated with a new tower, rising higher and prouder than its neighbours. From New York to Tokyo by way of London and Shanghai, skylines change, adopting bold new contours. Last frontier of the avant-garde, Dubai dwarfs its competition. Extravagant creations punctuate the headlong rush to the cityscape of tomorrow, with doors and windows open to the world. In this breathtaking setting, the new BOGART CITYTOWER rises to greet the sky, bathed in light. The interior and exterior of its glass carapace fuse as one. The same painstaking research that produced this structure and midnight blue cap has taken fragrance to new olfactive heights. Here, the design is not a philosophy but rather a legend that lives and breathes with its time.