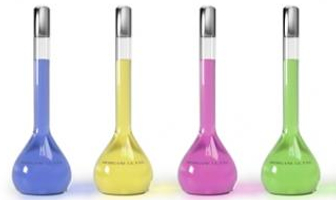 Four initial fragrances, capable of interpreting female temperament in some of her more enigmatic guises.

Only a chromatic note distinguishes them, because it is nameless, in the same way as personality is recognised by its unique nuances.

Morgane Le Fay Pink ~ "This perfume is dedicated to the woman who longs for an encounter with the magical." Including notes of bergamot, sweet orange, fig leaves, gardenia, jasmine, lily of the valley, osmanthus, ylang-ylang, tuberose, clove, iris, musk and vanilla.

Morgane Le Fay Blue ~ "The blue fragrance is dedicated to the quiet and balanced side of the female personality." With notes of pink pepper, galbanum, lily of the valley, white jsmine, rose, ylang-ylang, sandalwood, benzoin, musk and incense. [Note: there is a previously released Morgane Le Fay fragrance called Blue in a similar "beaker" bottle, and I do not know if this is the same juice.]