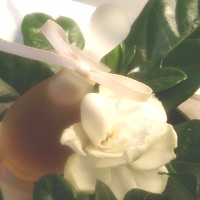 Gigi, described as a "grand gardenia sans the drama", is the latest fragrance release from indie all-natural brand Ayala Moriel:

Gigi is the newest adition to the Ayala Moriel's Language of Flowers soliflore collection. It is a gardenia soliflore that is lighthearted and at the same time voluptuous. The rare smoothness of Mysore sandalwood lays the foundation for a gardenia illusion - where sambac, jonquille, tuberose, kewda and cardamom dance in unity to create the warm, creamy-spicy sensuality of white petals. 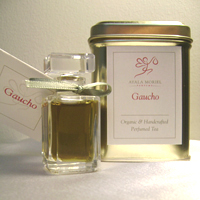 Gaucho was launched last month along with a matching organic tea with green yerba mate and sencha.

Gaucho perfume is named for the South American cowboys of the Pampas and an homage for a song by this name by Steely Dan. Coumarin is the soul of Gaucho from the bitter yerbamate to that sweetness of hay and rosemary and the alluring deertongue (liatrix). Bergamot and galbanum add sparkling greenery and Africa stone tincture adds a raw, animalistic-leathery undertones.

Last but not least, we have Incarnation, an oriental-spicy carnation soliflore introduced in January:

Peppery, fiery, sweet and seductive. It unfolds its voluptuous petals dusted with nutmeg and mace, and unleashes its scent with a spinning of a Flamenco dancer’s skirt.