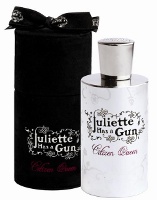 Juliette Has A Gun has launched their third fragrance, Citizen Queen. The scent is described as a chypre aldehyde with animalic notes.

A perfume as intriguing as this woman’s look, hidden behind her hat.

First, a striking and elusive allure.

Suddenly, the wind blows and a fragrance is surrounding me.

An intimidating chypre, that has a slacker and wicked « je-ne-sais-quoi ».

Oddly enough, aldehyde and animal notes are coming to me.

Juliette Has A Gun Citizen Queen is available in 50 and 100 ml Eau de Parfum. It can be found now at Colette in Paris, and is expected to launch elsewhere next month. (via press release from Juliette Has A Gun)