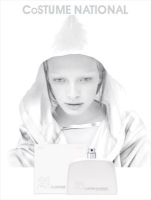 In some ways, 21 Costume National makes a perfect follow-up to Friday's post about fragrance notes; the "21 notes" is a nice conceit, no? Perhaps someone can make out all 21, and no more, but I'm not that someone. It starts off with a spicy citrus buzz, then the orange blossom shines for a time before it slowly evolves into a creamy-milky rice pudding, subtly spiced and mildly vanillic, over dark woods and a dash of incense. The base is rich and earthy, and it wears like a fall-winter-spring comfort scent, at least, for those of you who find creamy woods comforting. It isn't heavy, exactly, but nor is it as sheer as some of Costume National's previous fragrances. It wears rather close to the skin in the later stages, though.

I love creamy woods fragrances, and 21 Costume National is perfect. For days now I've been going crazy trying to think of what it reminds me of — and it does remind me strongly of something or another — but I can't think of what it might be. If you can help, do comment. In some ways, it could function as the extreme version of Kenzo Amour (what I was hoping Amour Indian Holi might turn out to be, but didn't), and it also fits in nicely with my other spicy wood pudding favorites: Tan Guidicelli Annam, Sonoma Scent Studio Bois Epices, Givenchy Organza Indecence, and so on. It has more of a quirky streak than anything in that list, though. I want a bottle.

Costume National 21 was developed by perfumer Juliette Karagueuzoglou, and is available in 50 and 100 ml Eau de Parfum. I don't think it has made its way to the US yet, when it does, see the listing for Costume National under Perfume Houses for buying information.