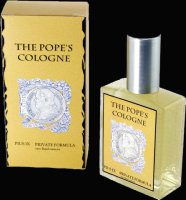 An enemy of “modernity” and civil rights; an admirer of the Confederate States of America (and correspondent of Jefferson Davis); a man who once proclaimed Roman Jews to be “dogs” and who said he would confine them to their “hole” — the Jewish Ghetto — if they didn’t behave according to his wishes (they didn’t, he did); one who felt, and had himself declared, infallible, Pope Pius IX (born Giovanni Mastai-Ferretti, 1792-1878) is the troublesome “image” behind The Pope’s Cologne. (I guess this is niche perfumery at its zenith…or nadir.)

Several years ago, Dr. Fred Hass of Excelsis Fine Fragrances in San Rafael, California, came across a 19th century recipe for a cologne that was supposedly worn by Pope Pius IX, and Hass decided to re-create the scent and sell it. The Pope’s Cologne contains sweet orange, orange blossom, lemon verbena, lavender, clove, violet (and a few ‘secret’ ingredients). The cologne starts off with fresh, almost minty, citrus and lemon verbena. The citrus begins to sweeten quickly — it’s as if a pinch of sugar and some vanilla beans had been tossed into the formula. The fragrance is well blended and the floral notes combine seamlessly to create a “warm,” summery accord. As clove begins to spice the flower notes, The Pope’s Cologne almost smells “incense-y.” The Pope’s Cologne is simple, delicate, and a bit ‘soapy’; it is a clean, chaste scent. The Pope’s Cologne is an excellent fragrance for children, and at the reasonable price of $25.95 for 2 ounces, it makes a refreshing room spray too.

If I had been in charge of marketing The Pope’s Cologne, I would have ‘forgotten’ its association with Pius IX and presented it as a “Vatican” concoction; its wearers could then associate the perfume not only with popes, but with art, architecture, Rome. Hass has said in a San Francisco Chronicle interview that, though he is Catholic and interested in the history of the papacy, his main interest in re-creating The Pope’s Cologne was getting involved in perfumery. As I investigated Pope Pius IX, I pondered how other perfume houses might have approached the naming of this scent and the man who wore it — État Libre d’Orange would have had the nerve to call the fragrance The Reactionary and I can imagine Parfum d’Empire, always making the horrendous sound romantic, coming up with a quaint name like Holy See or Le Pape avec les Idées Arriérées*.

* The Pope with Old-Fashioned Ideas

More reading: an article in Time magazine about Pius IX and the controversy surrounding his beatification and proposed canonization.