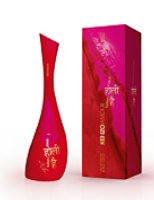 Coming in February from Kenzo, Kenzo Amour Indian Holi, a limited edition fragrance named for the Indian Festival of Colors.

The original Amour fragrance has been reworked by perfumers Daphne Bugey and Olivier Cresp, and has...

...become more colorful with notes of rose essence, pink pepper and peony. Though it remains close to the original, changes have been made: the vanilla is less marked and the floral and musky notes have been accentuated, along with woodsy, fruity and balmy notes.