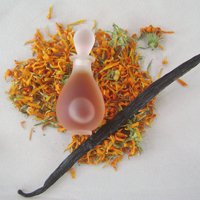 The maple-like nuances of immortelle absolute are used here along with sweet orange, cinnamon, wheat and three different infusions of vanilla, creating a perfume that truly captures the aroma of cinnamon-pancakes and Tire d’Erable (“taffee on the snow”), an inseparable part of the Quebec heritage in the Maple Harvest Festivals. You’ll find it hard to resist licking this perfume, but it will prove to be a true friend for a love-injured heart.

Ayala Moriel Immortelle l'Amour is available in Parfum. Later this month, it will also be available in a tea form developed by Inner Alchemy Tea Co. of Vancouver. (via ayalamoriel)