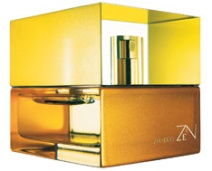 Shiseido will launch the third incarnation of its Zen fragrance this September (prior versions were launched in 1964 and 2000). The new fragrance was developed by perfumer Michel Almairac, and is described as a "fresh, floral woody scent" with notes of grapefruit, bergamot, peach, pineapple, blue rose, freesia, gardenia, red apple, violet, lily of the valley, hyacinth, rose, lotus flower, patchouli, cedar, musk, white musk, amber, incense and marine plant.

The "blue rose" springs from the marriage of a rose and violet, according to Almairac, who explained, "It has a very particular odor — a lemony note."

The bottle, by Taisuke Kikuchi, was inspired by a Japanese tearoom. Shiseido Zen will be available in 30, 50 and 100 ml Eau de Parfum. A launch date for the US has not yet been determined. (first quote via cosmeticnews, second via Women's Wear Daily)