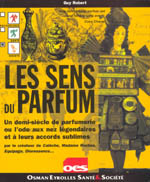 "We are like painters: some use simple colors, others prefer sophisticated ones. It's the result that matters". With over half a century of professional experience under his belt, Guy Robert knows what he's talking about. He grew up among perfumers, trained many talented noses throughout his career, and created a few brilliant fragrances of his own. His book Les sens du parfum reads like a straightforward, down-to-earth tutorial for novice perfumery students: what does it take to master this difficult craft, and where does one start? Besides providing a fascinating insight in the world of the modern perfumer, this book also serves as a practical guide for perfumistas. (French-speaking perfumistas, to be precise.)

The first three chapters of the book cover perfume history, the sense of smell, and fragrant raw materials. Interesting subjects of course, but hardly discussed at length, so don't expect to learn a great deal from these pages. Chapter four is where the author's professional expertise comes into play: this is the part dedicated to perfume creation. In my view, it's the best section of the book. It revolves around a concept known as the perfumer's palette, a set of specific notes and ingredients favored by each individual perfumer. Robert demonstrates the creative differences between François Coty, Jacques Guerlain, Ernest Daltroff, and Henri Alméras by comparing their personal preferences, and proposes a simplified version of a more generic, 'classic' palette to be used by novice perfumers.

Besides these individual palettes, there are also different ways of writing down perfume formulae. There is no universal language or 'scripture' in perfumery, which leads Robert to distinguish three types of noses on the workfloor: first are those who manufacture their own perfumes, like Coty, Alméras, Paul Vacher, Pierre Dhumez, Paul Parquet, and possibly Jacques Guerlain. They used to write their formulae in accordance with the production sequence, as efficiently as possible. The second group consists of people like Jean Carles, Henri Robert (Guy's uncle) and Bernard Chant, who took a more schematic approach: they grouped notes and accords by their respective fragrance families. And finally there are those who refuse any type of orderly method, preferring to work in complete chaos instead. Allegedly, Ernest Shiftan was one them; "and yet he was an outstanding perfumer".

All these different methods can be a nuisance at times, even for experienced perfumers like Guy Robert. He has always applied the classification method developed by his uncle Henri, and confesses that other people's formulae are sometimes hard for him to grasp:

"Having used this system for over 54 years, I admit that when I read a formula written in a different sequence, I can only imagine and understand its odor by rewriting it in my own way. Only then will I 'smell' the product, like a musician who 'hears' a piece of music by reading the score." (p.80)

While it's important for young perfumers to learn from their predecessors, Robert argues that simply studying the original formulae by Coty, Guerlain or Daltroff is not enough. "To fully understand these giants, you'd have to stand next to them at work." Here's the irony: while today's novice perfumers are blessed with a state-of-the-art perfume school, it's nearly impossible nowadays to find a reputable perfumer who sees any benefit in taking on a young apprentice.

In conclusion, one can only hope that people like Guy Robert will continue to walk this earth and share their knowledge for many years to come. Les sens du parfum is a generous gift to the perfume community, which definitely deserves to be reprinted, and then translated in English if possible.