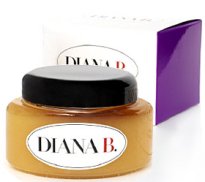 Last year, former actress and model Diana Barton introduced Diana B., a line of body lotions, bath gels, candles and scrubs that claimed to revolutionize skincare. The rather high price point ($28 - $45) initially made me dismiss the line as yet another instance of overhyped, celebrity-endorsed nonsense, but a rave from a friend convinced me to pick up the scrub and give it a try; I was soon kicking myself for not having given the products a chance before.

The scrub is remarkable, really unlike any I have used before. It’s quality is immediately apparent; the sugar granules themselves are incredibly fine, and because it is oil-free (or at least oil-light, the company claims to use natural syrups instead of oil), there is no need to stir or shake it or otherwise deal with the annoying separation that happens with most scrubs. It exfoliates amazingly well, easily and expertly sloughing off dead skin and leaving a healthy layer beneath. The fineness of the grain and the lack of oil mean that it can be used on the face as well as the body.

Of course, if you are searching for a very moisturizing scrub, you should look elsewhere, as, being low on oil, the scrub is primarily meant as an exfoliant — if you have dry skin, it should definitely be paired with an emollient body wash and lotion.

The main selling point for me, however, was not simply the functionality of the scrub, but its divine fragrance. I tried Black Fig, a rich velvety scent, dark and mysterious, the smell of a silent midnight forest grove. It is actually very reminiscent of the dark, intoxicating hemlock opening of Ormonde Jayne’s Ormonde Woman fragrance, and I love pairing the two together for a night out.

The line also offers its products in three other fragrances: Maple Lychee, Green Tea Grapefruit and Peach Frangipani, and all are well worth a try. The Sugar Scrub is $45 for 21 oz, and can be found at luckyscent and orangeblossomspa.