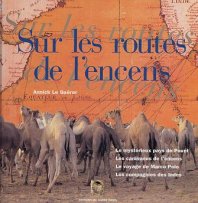 New books smell great. There's something mysteriously seductive about that lovely scent of pencils and printed paper, lingering in the air of quiet bookstores. Books about perfume are not the most pleasant ones; for that matter, I'd much rather bury my nose in a leafy foreign dictionary, or in some classic novel with a heavy, cardboard cover. There is, however, one notable exception: a scratch-n-sniff book entitled Sur les routes de l'encens ("on the trail of incense"), written by Annick Le Guérer and produced in collaboration with Dominique Ropion and IFF. The book is a fragrant journey through time, revolving around a series of ancient expeditions: it takes us back to the banks of the river Nile, the Arab and Persian worlds, classical times in Rome, Marco Polo's travels to China, and the East Indies spice trade in the 17th century.

Dominique Ropion recreated five scents based on authentic recipes, reflecting odors that were typical to those times and regions. Chapter one explores the land of Punt; according to Egyptologists, it was located somewhere between the western coast of the Red Sea and the Blue Nile, bordering with the Sudan, Eritrea and Somalia. Since the 15th century B.C., Egyptians obtained their spices from this mysterious land; the legend goes that Queen Hatshepsut (c. 1472-1458 B.C.) was called upon by Amon to send her best naval explorers to that region, so they could bring back incense and honor the gods. The fragrance tied to this legend is Egyptian Kyphi, which in Ropion's interpretation has a surprisingly modern, sweet floral feel to it. The recipe lists dry raisins, juniper berries, mint, myrrh, wine, saffron and honey, among others.

It's one of my favorites of the lot, together with the fresh, rosy scent of Foliatum from ancient Rome that illustrates the second chapter. It was described by Pliny as the "fragrance of rich women", and contains old-World ingredients like balanos oil (mentioned by Theoprastus in his Enquiry into Plants) and omphacium. The use of perfume in ancient Rome was notoriously abundant: from baths to clothes, shoes, wines, dogs and horses, everything was scented. The lavish use of expensive fragrances was criticized by poets like Martial and Horace, but rich patricians were hardly impressed. Try Foliatum, and you'll understand why.

Next, we follow Marco Polo in his journey to China. The great wealth of spices and other raw materials he discovered along the way is impressive. He described musk from the kingdom of Lianghzou as the "finest and strongest in the world"; a timeless photograph of the valley of Tibet gives us an impression of Marco Polo's outlook in those days. An old recipe based on woods and amber (said to protect its wearer from epidemics) was recreated by Ropion to revive the smells of the Far East: it's heavy on incense, and tickles the nose. Last time it made me sneeze.

17th century explorations to the East Indies are the last stop in this fragrant history. I feel a special connection with this part of the book: my old university building in Amsterdam served as the main location where Dutch tradesmen stocked their spices from those regions. From tea leaves and cinnamon to ginseng roots and benzoin, we discover the treasures of Madagascar, Sumatra, India and Sri Lanka that were exploited by merchants from the main capitals of Europe. A leathery, floral, musky perfume for gloves (proposed by Simon Barbe in his 1699 book Le Parfumeur Royal) embellishes the end of this chapter. Depicting a slightly earlier era is the fifth fragrance in the series: a spicy-vanillic composition inspired by Rabelais' book Gargantua (1534), and known as the 'Scent of Angels'. It was the fragrance of choice among the women of the Abbey of Thélème (a fictional monastic institution that rejected poverty, celibacy, and obedience) and contains a mix of benzoin, styrax, cinnamon, coriander, calamus and lemon.

This charmingly illustrated work is the most refined scratch-n-sniff book I've ever laid my hands on. The concept is not unlike Scents of Time by Edwin Morris (which comes with a series of small perfume bottles); however, being limited to specific themes, the insights in this Sur les routes de l'encens are deeper and more elaborate. Annick Le Guérer is one of the leading perfume writers in France, and certainly one of my personal favorites; Dominique Ropion is, of course, a master in his own right. Together they have created a book that pleases both the eyes and the nose: could this be the future in publishing?