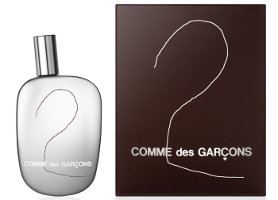 Comme des Garçons launched their second "signature" fragrance, Comme des Garçons 2, in 1999. Those who expected the brand to reach for a significantly wider audience may have been surprised by what they came up with; reportedly, perfumer Mark Buxton was told to create a scent recalling "black ink". The final product...

...is based on two olfactive categories: technological, which contains notes of ink and new aldehydes, and natural, which comprises incense, magnolia, patchouli, cedarwood, amber and labdanum. "The perfume is all about contrasts and compliments, and the duality expressed by the number two," noted Hawkins [Lisa Hawkins, marketing VP], who explained this was the intention of Comme des Garcons designer Rei Kawakubo. (Women's Wear Daily, 8/8/2003)

Mark Buxton used headspace technology to capture the smell of Japanese calligraphy (sumi) ink, and in fact, Comme des Garçons 2 smells an awful lot like ink — think inky aldehydic floral, and you kind of have the idea. The top notes add a high pitched, nearly metallic buzz of aldehydic citrus, and in the dry down there is a rush of spices grounded by woods and incense, not altogether unlike Comme des Garçons Eau de Parfum or White, albeit without the bitter undertone those two scents share.

It has a definite floral character (much more so than Eau de Parfum or White) but to my nose, it doesn't smell like any flower in particular. The dry down is earthy (lots of vetiver) and mildly powdery, and it stays spicy straight through to the end. Fellow cumin-phobes: it is noticeable, but not overwhelming.

Comme des Garçons 2 is an Eau de Parfum, and the lasting power is excellent. It is available in 25, 50 and 100 ml bottles. There is also a matching body cream and body lotion, candle, incense and a body soap.