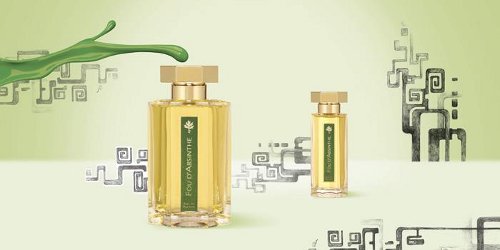 L'Artisan launched Fou d'Absinthe earlier this year. It is said to be the first fragrance from L'Artisan to be marketed specifically to men, although there are certainly other "masculine" fragrances in the line; it also introduces a new bottle design that will eventually be used for all of the L'Artisan fragrances. Fou d'Absinthe was created by perfumer Olivia Giacobetti and features notes of frozen alcohol, absinthe, blackcurrant buds, angelica, star anise, four spices cocktail (pepper, clove, nutmeg, and ginger), patchouli, pine needles, cistus and fir balsam.

L'Artisan describes the opening of Fou d'Absinthe as...

...a steely grip of icy-cool alcohol, enveloped by an explosively aromatic bouquet composed of absinthe, a green, slightly bitter note, tingling spirit of angelica and crispy spring-like blackcurrant buds that give way to subtle fruitiness.

I have never tasted real absinthe so I have no idea how close the fragrance is to the drink, but the top notes do in fact evoke an alcoholic drink of some sort; it is cool and bright and dry, with, as advertised, bitter green undertones. Unusually for L'Artisan, Fou d'Absinthe is being released as an Eau de Parfum — I hope someone will correct me if I am wrong, but I believe that the only other Eaux de Parfum in the line were introduced as Extreme versions of previously launched fragrances — and from the start, it feels deeper and richer than the line's usual offerings.

The anise note is not quite so prominent as it is in some other absinthe-based fragrances, but it blends beautifully with the other herbal notes. The spices are likewise muted. As it dries down, the briskness of the opening fades, and Fou d'Absinthe gets warmer and softer: it smells like sun-warmed earth with a touch of bark and a sprinkling of pine needles. Eventually it is a very mellow blend of patchouli, amber and vetiver, still nicely dry, with just a whisper of indistinct spice notes.

It is a lovely composition, and I should think it will find many fans. It is, to be sure, masculine; I am sure there are women who will wear it, but there will be many who won't. Do try it on skin, at any rate; you might be surprised by the dry down, which strikes me as less overtly masculine than the opening.

Fou d'Absinthe is available in 50 and 100 ml bottles; for shopping information, see the listing for L'Artisan under Perfume Houses.