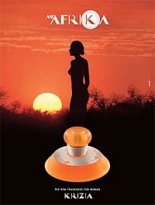 Krizia has launched My Afrika, a new fragrance for women featuring notes of ginger blossom, lime, jasmine, heliotrope, shea fruit, amber, ebony and ginger. The rings on the bottle neck and outer packaging were inspired by the traditional beadwork collars worn by Maasai women. (via cosmoty.de)

The Le Petit Prince range of fragrances for children, including Le Petit Prince, Le Petit Prince B612, La Rose du Petit Prince, Dessine Moi un Mouton and Les Triplés lines, is officially launching in the United States this month. The brand was introduced in France in the 1990s, and a few of the fragrances have been available at the online fragrance discounters in the US for some time. (via cosmeticnews and Women's Wear Daily)

Bond no. 9 will release Fire Island on July 1. The unisex fragrance includes notes of cardamom, ozone, neroli, white musk, tuberose and patchouli. It is available now for pre-order at beautyandscents and beautycafe.