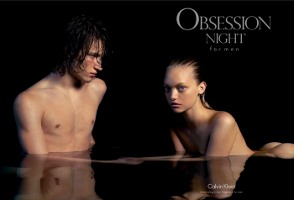 Calvin Klein’s first attempt at a variation of one of his most popular men’s fragrances brings us Obsession Night for Men, a subtle new twist on an old favorite. Notes include crisp watery notes, pear, cardamom, nutmeg, suede, patchouli, vetiver, warm woods and vanilla.

Obsession Night for Men doesn’t resemble the original Obsession as much as it resembles Ferragamo for Men, but whereas Ferragamo opens with fig notes, Obsession Night offers a unique, watery pear note. It then moves on to a warm oriental base highlighted by a luxurious suede accord. The entire composition is well-blended and never really develops much…though frankly, it doesn’t have to. Although I’m not totally smitten with this scent, it has grown on me each time I’ve tested it. A much better scent than another CK variation, Eternity for Men Summer, I find this one to be less about “modern and sexy” and more about comfort.

Obsession Night for Men is a great big soft fuzzy blanket, just out of the dryer, soft, and smelling faintly of sweet, ripe fruit — it helps me relax and unwind. This is the scent I’ve reached for on cold nights after long days, and one I don’t mind re-applying over and over just to re-charge the comfort factor. Yes, the pear is prominent, and yes, the suede really does create a presence. The addition of nutmeg, the oddly named “crisp watery notes” and a touch of vanilla combine to make this newest Calvin Klein scent for men a success. Imagine the watery sweet notes of Truth for Men (if you haven’t tried this yet, you really should) combined with the warmer basenotes of Obsession and you’ll get an idea as to how Obsession Night for Men smells.

Calvin Klein Obsession Night for Men can be purchased at sephora and most major department stores.