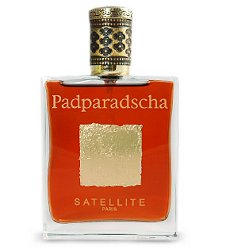 Satellite is a Paris-based jewelry line that was launched by Sandrine Dulon in the late 1980s. Dulon was originally an ethnologist, and her designs are inspired by the antique jewels and other materials she discovered on her travels. The line's first fragrance, Padparadscha, is named for the rare Padparadscha sapphire, and the notes include amber, musk, cedar, sandalwood, juniper and pepper.

Padparadscha starts with a nice burst of pepper, and softens to a mildly spicy blend of woods. The juniper gives it a slightly herbal cast, and the amber adds warmth without any sweetness. It is slightly earthy in the early stages; later, it is smoother, and sandalwood and musk are the predominant notes. There is a perhaps a smidgen of powder, but the overall finish is dry (really, really dry), so it might more properly be called dusty.

The first time I tried Padparadscha, I had the distinct feeling that I had smelled it before. After trying it next to everything similar I could think of, I would say it isn't a dead ringer for anything else I can find, but it is in the same vein as many other dry wood fragrances, several of which have already been mentioned in conjuction with Padparadscha on the fragrance boards: Ginestet Le Boise, Christian Lacroix Tumulte Pour Homme, or the woodier of the Comme des Garçons Incense series. So it isn't startlingly unique, but it is a lovely fragrance in its own right, and like the others mentioned above, it has a comforting quality that is perfect for another blah day in mid-February.

It is rather mild and close to the skin. The lasting power is almost but not quite what you would expect from an Eau de Parfum, but it is priced like an Eau de Toilette anyway — $65 for 100 ml, very reasonable for a niche fragrance — so I have no complaints. And the packaging is gorgeous.

Padparadscha is available at luckyscent in the US or first-in-fragrance in Germany. Satellite also has a boutique on West Broadway in Soho.