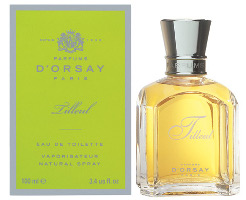 Count Alfred d’Orsay (1801-1852) was a French-born dandy, said to be the "most fashionable man in the most fashionable circles in the most fashionable town in the world: London" (Last of the Dandies: The Scandalous Life and Escapades of Count d'Orsay, by Nick Foulkes). He dabbled in perfumery; the Parfums d’Orsay line was launched after his death, reportedly using an original Count D’Orsay formula for a fragrance called "Eau de Bouquet", now renamed Etiquette Bleue. I do not know the detailed history of the line, but they were issuing new fragrances into the the 20th century, and the line was "revived" in 1995.

Earlier versions of Tilleul were released in 1927 and 1955. The current reformulated version was created by Olivia Giacobetti. It features notes of lemon tree leaf, angelica, watermelon, lime blossom (aka linden or tilleul), cyclamen, cut hay, acacia wood and beeswax. Joining me once again for an opposing viewpoint is Marlen, one of the moderators on the basenotes forum.

He says: My friend Karen and I had 90 minutes to kill before a matinee of Amadeus some years ago and so we decided a quick stroll down 5th would be a great way to pass the time. She wanted a fragrance that would be hers — unique, soft, personal, and feminine. I wanted to buy the entire first floor of Takashimaya (this was before the renovations)...our last stop was Bergdorf, where we discovered a line by the name of D'Orsay.

D'Orsay has proven to be a house with clever scents and years of history behind it. I fell in love with Le Dandy, Karen with Tilleul. Sadly, I couldn't share her enthusiasm with the "scent of summer lime blossoms". The scent reminded me of the short-lived "scented Kleenex" line from the 80's, a comparison that can't be shaken. The scent was lovely, yes, but insipidly so. With a slightly fruity edge, the powdery lime blossom smelled almost musty to me, perhaps from the beeswax and hay notes. On my skin it started and ended with linden, and I don't like linden. Karen loved it, however, and I have to ask her if she still wears it or bought a second bottle. For me, I would neither want to wear it myself nor smell another wearing it. This would be a good scent for the powder room.

She says: D'Orsay Tilleul is one of my favorite summer fragrances. It starts off crisp, with linden and citrus, and settles into an airy, delicate blend of linden and hay. The beeswax is quite pronounced — if you have ever smelled a real beeswax candle, you will recognize that honeyed aroma here. I have seen complaints that the watermelon note is overwhelming, but I don't notice it.

It is a calm, placid scent, something to wear while napping in a hammock on a hot summer day. It does smell clean, and maybe even a little soapy, so as much as it hurts, I have to concede that I understand the references to powder rooms and kleenex. To my nose it is the nicest linden around, but as Marlen suggests, if you don't like linden, it is probably not going to end up gracing your dresser.

Tilleul is an Eau de Toilette, and the lasting power is so-so. For buying information, see the listing for Parfums d'Orsay under Perfume Houses.