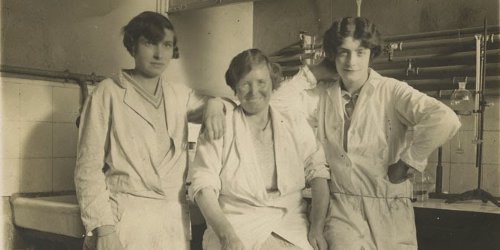 Happy Friday and happy Pencil Day. Our community project for today: honor Women’s History Month by wearing a fragrance by perfumer Germaine Cellier or Josephine Catapano, if you have one. If you don’t, wear a fragrance by any female perfumer.

Perfumer Josephine Catapano, formerly of International Flavors and Fragrances, passed away earlier this week at the age of 93…

On a cruise of Goodwill a few weeks ago, I made two scores: Amouage Gold for women in its Cristal bottle (no cap, though), and a bottle of Norell Eau de Cologne, each for $9.99. Sure, I was happy to take home the Amouage, but I was almost more excited to have an old bottle of Norell. For a vintage clothing lover like me, Norell is a holy grail of quality and simple but flattering construction.

I’d smelled Norell Eau de Toilette at the drugstore and been disappointed, but surely an older bottle would be different. This bottle looked so promising: a squared-off pillar with a collar of gold-toned metal, and Norell running down its side in block letters. The juice was a classy pale auburn. Would the fragrance itself hold up?

Norman Norell was born Norman Levinson in Noblesville, Indiana in 1900. Unlike many flash-in-the pan designers, Norell made his name in his youth designing costumes first for silent films, then for movies, then moved on to a career teaching fashion design and selling his work first under the label Traina Norell in the 1950s (“Traina” coming from the name of his business partner, Anthony Traina) then under his own label in the 1960s for a long, solid career.

Although now Norell’s name is largely forgotten, back in the day he held his own with Dior and Givenchy…