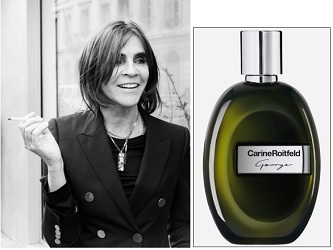 I “know” fashion stylist/editor/consultant Carine Roitfeld from hundreds of interviews and media profiles, her book Carine Roitfeld: irreverent and the self-mythologizing documentary film Mademoiselle C (could have been called Carine Roitfeld: interminable). Though I didn’t know much about Roitfeld personally (outside her 10-year editorship at Vogue Paris where her tastes and style made American Vogue look like Family Circle magazine in comparison) I did my research. All those here at Now Smell This who have commented on Tom Ford’s “soft-core” editorials and advertisements (for Gucci and his own brand) — blow Carine a kiss…or give her the finger. Roitfeld’s vision as a stylist influenced those ‘porno-chic’ photo shoots.

Admissions: When it comes to editors-in-chief at Vogue Paris/French Vogue, I’m more of a Joan Juliet Buck and Emmanuelle Alt kinda guy AND I’m two years late to the Carine Roitfeld perfume party…

At his last Chanel show, he told her that the first time he was offered the Chanel job he turned it down because other people told him it wouldn't be the right move. "They asked him the second time and people said, 'No I don't think so,' and finally he accepted, just because people told him not to do it, and in a way the perfume is the same. I decided to do it even though people say [not to]." 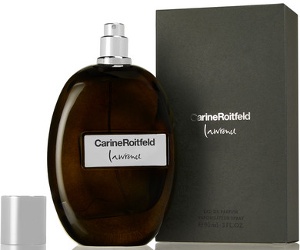 On Tuesday, Feb. 26, the second day of Paris Fashion Week, the city will wake up to 4,000 posters of Carine Roitfeld. The placards show her completely naked, looking out a window and making a peace sign with one hand.

[...] The posters are intended to introduce, teasingly, Carine Roitfeld Parfums, a collection of seven “genderless” fragrances inspired by seven fictional lovers from seven cities around the world. “We had to build everything ourselves, to make the juice,” Ms. Roitfeld said. “Usually people do this as a collaboration but I didn’t. I hope people buy it.”

— Ms. Roitfeld (best known as the former editor of Vogue Paris) will debut her new fragrances in May. Read more at Where Is Carine Roitfeld Now? Making Perfume at The New York Times.