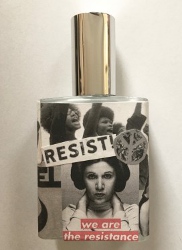 We created these new fragrances for BLAM Gallery in Brooklyn , who challenged us to create a scent diffusion and two fragrances in honor of their upcoming exhibition, “Midnight Mass”, an interactive installation celebrating the rebellious attitude of club scenes across the world- past, present and future. Revolution is the name of game, and we were inspired by the street protests of civil resistance called the Jasmine Revolution in Tunisia, which led to a thorough democratization of the country and free elections, as well as the peaceful Velvet (or gentle) Revolution of Czechoslovakia, which effectively restored democracy in the country. We were equally inspired by the civil rights protests, black power movement and the recent Women’s March in our country and it’s incredible history of protesting in the fight for human rights. We created hand collaged bottles for these scents, each one limited and numbered and will be exhibited on Friday, March 17th, 2017.

House of Cherry Bomb has also created a Diffusion scent for The “Midnight Mass” experience, a multi-sensory, “concept” event taking form as a dance party on March 24th, 2017. The scent is named “4 Am” with notes of clove cigarette, leather Jacket, musk, weed, cheap beer and heavy metal.

Resist ~ "RESIST is a loud, strong scent- the battle cry of millions of protesters, trails of smoke and metal, oud, cement, jasmine and blood."

Pussy ~ "PUSSY is as sensual as it is powerful, embodying the brilliance and tenacity of feminists the world over. Leather, amber, musk, fig, tuberose, honey, labdanum."

Four hand decorated bottles of each perfume were created; they are $300 each for 60 ml, with a portion of the proceeds to benefit Planned Parenthood (Pussy) and American Civil Liberties Union (Resist).

* Please note that since it would be nearly impossible to comment on these fragrances without violating our comment policy, I have closed comments. We will continue, as we always have, to report on new fragrances even if they have a partisan political message, but given the current political climate, it seems best not to talk about it in the comments. Sorry!