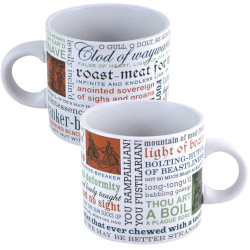 I overslept this morning and I'm still too groggy to pick a fragrance. I'll post mine in the comments later. Tea at the moment is Upton Old South Meeting House Breakfast Blend.

Reminder: 6/17 will be William Shakespeare Friday...wear a fragrance that matches a favorite line from a sonnet or play, or do something else creative with the theme. Suggested by allo.

Note: the Shakespearean Insults Mug ("From all reports, William Shakespeare was a decent guy. He was generous, funny, and could drink with the best of them. But one thing you didn't want to do is piss him off. Shakespeare was the Don Rickles of Elizabethan England – His brilliantly crafted insults and witty barbs could bring the fiercest soldier to tears. The Shakespeare Insults mug is covered with the Bard's funniest and most biting insults from his plays") is $18 at The Unemployed Philosophers Guild.